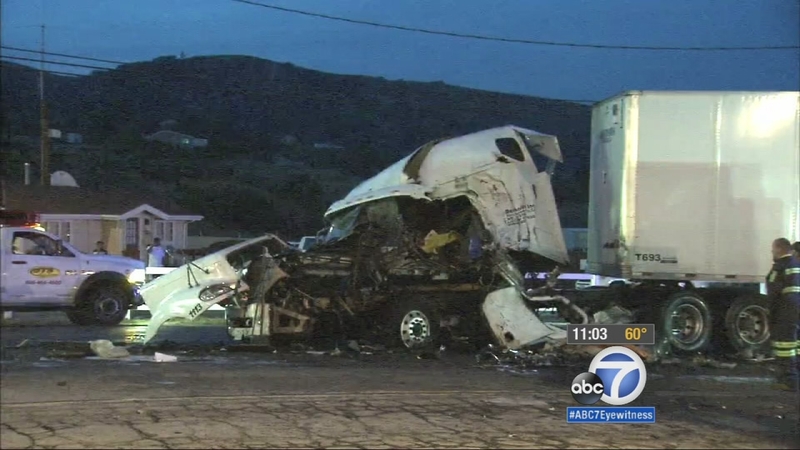 FRAZIER PARK, Calif. (KABC) -- Two people were killed after a woman reportedly armed with a knife stole an ambulance, then crashed it into a semi-truck in Frazier Park.

Kern County fire Capt. Tyler Townsend says firefighters and paramedics with Hall Ambulance Service responded to a call of a woman having a seizure. The woman approached the paramedics with a knife, stole the ambulance and took off. The ambulance crew let her take the vehicle without a fight.

"We preach safety first. They followed the protocol and removed themselves from the situation," said Mark Corum with Hall Ambulance Service.

Witnesses said the ambulance was traveling at 100 mph without turning on the sirens.

The woman crashed the ambulance into a semi-truck in front of the Flying J plaza.

"It was like a bomb went off. That ambulance moved that truck!" witness Charlotte Deese said.

Investigators believe the woman may have intentionally drove into the truck.

Authorities respond to a crash between a reportedly stolen ambulance and a semi-truck in Frazier Park on Wednesday, May 13, 2015.

The woman and the driver of the semi-truck were pronounced dead at the scene. Their names have not been released.

"Hug the ones that you love, because, you never know, you might not come back. This could have been me!" Flores said.