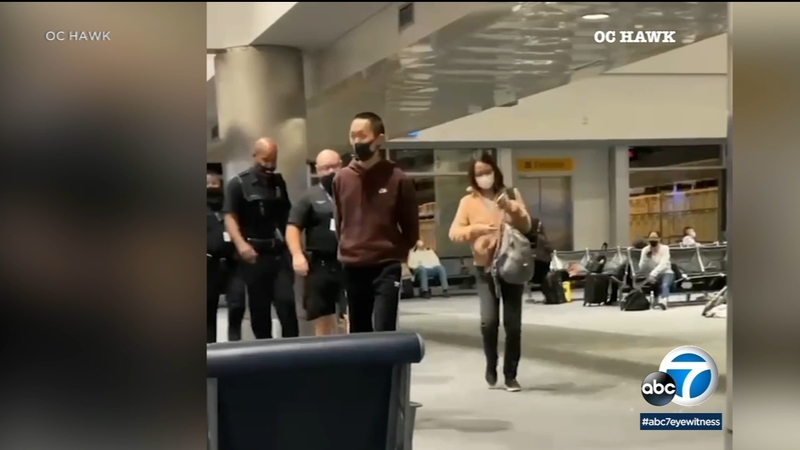 SANTA ANA, Calif. (KABC) -- An American Airlines flight from New York to Orange County was diverted after a passenger allegedly assaulted a flight attendant on Wednesday, according to the airline.

Flight 976 from New York City's JFK International Airport to John Wayne Airport in Santa Ana made an emergency landing in Denver after a passenger physically assaulted the flight attendant, American Airlines said in a statement. The plane eventually made it to Orange County.

The airline said the plane landed safely and taxied to the gate where law enforcement removed the passenger and took him into custody. A photo posted on Twitter by another passenger shows the suspect handcuffed and sitting at the gate.

"We are outraged by the reports of what took place on board. Acts of violence against our team members are not tolerated by American Airlines. We are working with law enforcement to support our team member and pursue prosecution, and the individual involved in this incident will not be allowed to travel with us in the future," American Airlines said in a statement.

One passenger says the violence was sparked when the man became upset over having to wear a mask, and then punched a female flight attendant twice in the face.

Witnesses on the plane said the violence was sparked by the passenger refusing to wear a mask.

Passenger Liv Johnson said she then saw staff duct-tape the passenger to a seat.

American Airlines did not provide further details into the incident or the condition of the flight attendant.

An unruly passenger is in custody after another violent disruption onboard a Delta flight, this time on a plane traveling from Los Angeles.

WABC-TV contributed to this report.