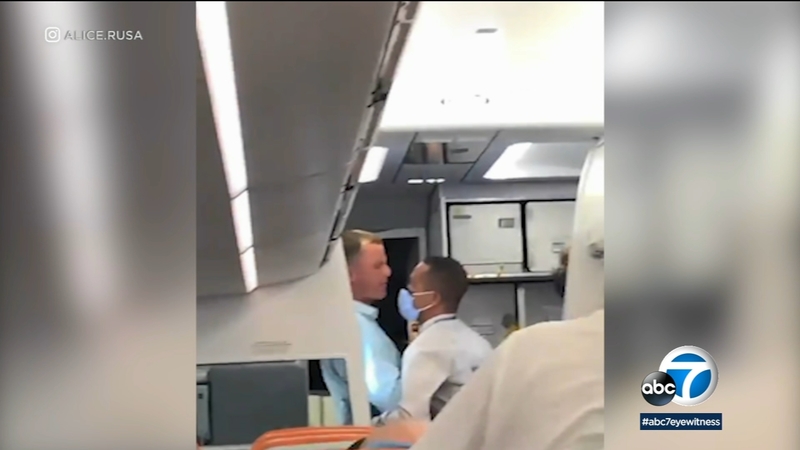 Passengers kicked off JetBlue flight to SoCal over mask rules

SAN DIEGO (KABC) -- Two passengers were kicked off a JetBlue flight from Florida to Southern California after refusing to wear masks and when one became physically aggressive toward airline employees.

Video filmed by another passenger shows a man arguing loudly with crew members, cursing and at one point pushing them.

The airline says the man and the woman traveling with him refused to comply with mask rules despite being asked several times.

The Sept. 8 flight was scheduled to fly from Ft. Lauderdale to San Diego. The man and woman were removed before takeoff.

JetBlue says they will be banned from flying the airline again.

In a statement, the airline noted it provides training to crew members on how to handle passengers who refuse to comply with mask mandates.

"If a customer refuses to wear a face mask after being asked, crewmembers will work to de-escalate the situation to the best of their ability to gain compliance prior to removal," JetBlue said. "The safety of each customer and crewmember is our first priority, and we must work together to follow the federal mask mandate during the travel journey."

The incident came amid a sharp increase in unruly passengers on U.S. flights, with most incidents linked to mask compliance.

A Las Vegas man who growled like a dog and berated an American Airlines flight crew and fellow passengers on a plane from LAX to Utah was arrested.

On Thursday, federal officials said they are doubling the fines for people who break the rules requiring masks on airplanes, as well as trains and public transit.

First-time offenders would face a potential fine of $500 to $1,000 and second-time offenders could pay $1,000 to $3,000 under rules that the Transportation Security Administration said will go into effect Friday.

"If you break the rules, be prepared to pay," President Joe Biden said.

The president also rebuked people who have been taking out their anger about the mask requirement on flight crews.

"And by the way, show some respect," he said. "The anger you see on television toward flight attendants and others doing their job is wrong. It's ugly."

The mask penalties are separate from any civil penalties the Federal Aviation Administration may issue for unruly behavior.

The mask mandate has been controversial and has led to many tense encounters between passengers who don't want to wear a mask and flight attendants asked to enforce the rule. The Federal Aviation Administration said last month that airlines have reported 3,889 incidents involving unruly passengers this year, and 2,867 - or 74% - involved refusing to wear a mask.