Apple plans to add more than 3,000 jobs in Culver City 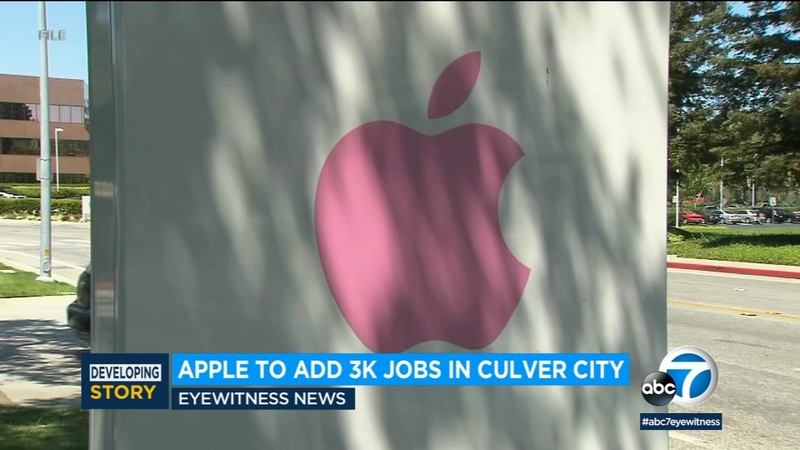 Apple plans to add more than 3,000 jobs in Culver City

CULVER CITY, Calif. (CNS) -- Apple announced that it plans to expand its Culver City team to more than 3,000 employees as part of the multinational technology company's plan to invest $430 billion and add 20,000 new jobs across the United States over the next five years.

"At this moment of recovery and rebuilding, Apple is doubling down on our commitment to U.S. innovation and manufacturing with a generational investment reaching communities across all 50 states,'' Apple CEO Tim Cook said in a statement.

"We're creating jobs in cutting-edge fields -- from 5G to silicon engineering to artificial intelligence -- investing in the next generation of innovative new businesses, and in all our work, building toward a greener and more equitable future,'' he said.

Word that Apple had leased Culver City office space at 8777 W. Washington Blvd. came in January 2018. The company was initially expected to have about 1,000 employees at the site, which is being developed by Lincoln Property Co. and has not yet opened.

"Culver City attracts jobs for the same reason it attracts residents. We are rich with talented people and great amenities. The challenge for our city now is to make our success work for the entire community,'' Culver City Mayor Alex Fisch told City News Service.

Apple announced Monday that along with expanding the number of employees, it will expand its "state-of-the-art campus with additional space'' for the employees.

According to the Cupertino-based company, Apple supports more than 2.7 million jobs across the United States through direct employment, spending with U.S. suppliers and manufacturers, and developer jobs in the smart phone app economy.

Some of the biggest names of the technology world are born and based in California. After some major names moved out of state, many wondered if the Golden State was still the tech capital. Experts say there is no need to worry, technology is still here.