Arjit and Akshata Reddy Chettupalli died after a driver rear-ended the family's vehicle, according to police.
KABC
By Amy Powell 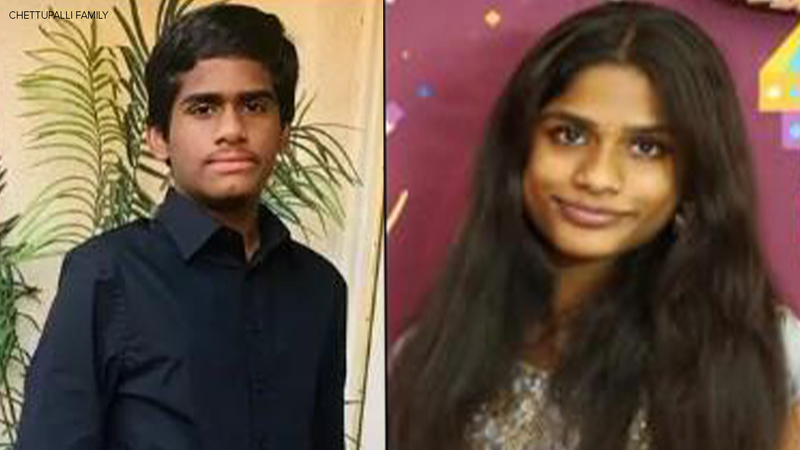 CHATSWORTH, LOS ANGELES (KABC) -- Friends and family gathered for a vigil Sunday afternoon in Chatsworth to support the parents of two teen siblings who were killed by a suspected drunk driver in a crash one week before Christmas.

Arjit and Akshata Reddy Chettupalli died after a driver rear-ended the family's vehicle on Lassen Street near Oakdale, according to police.

Investigators say the driver, a 20-year-old woman, was reportedly driving under the influence. She has since been arrested on murder charges.

Arjit, who was 14 years old, died hours after the crash, and his 16-year-old sister Akshata - who was lovingly nicknamed Lucky - was taken off life support on Christmas Day after being pronounced brain dead. Both teens were described as bright students.

"My kids ... there are not enough words to describe," said Ram Chettupalli, the teens' father. "My daughter was amazing and my son was, in a simple word, was kind of a human computer. They were very disciplined. They never did a single thing to the society. My daughter used to always tell me, 'Daddy, I don't know what I will do, but I will do something great for the society.'"

Dozens surrounded the heartbroken parents at Sunday's vigil, which was held at the crash site.

"[Arjit,] who was in 8th grade, he was an extremely talented kid," said a family friend. "My kids and their kids grew up together."

Akshata was a student leader at North Hollywood High School, and many of her friends came out on Sunday to show their support.

"Lucky was a consistently uplifting spirit and such a hard working student," said classmate Enzo Banal. "We knew her from student council. She was the vice president of junior council, and it's just such a heart-wrenching loss."

The close-knit Indian community in San Fernando Valley has been shaken since the tragedy, and they hope the siblings' family finds solace with the help of family and friends.

"This was my first year of school with Lucky, and she was just always, always so kind," said Alicya Young, another one of Akshata's classmates. "I'd walk in to the classroom and she'd be like, 'Hi Alicya!' I don't know. She was just always so amazing and always willing to help everybody."