VIDEO: Restaurant worker fights for her life against armed suspect in North Carolina 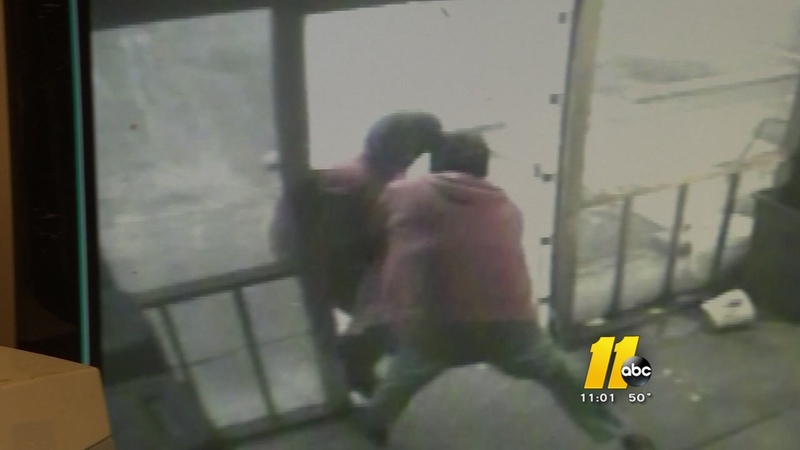 Women describes her fight for life with armed robbery suspect

GARNER, N.C. -- Wednesday morning started like any other for Brenda Harvey. She got up and started driving for another day of work at the Cleveland Draft House off Highway 42 in Johnston County, North Carolina.

She pulled into the parking lot about 7:15 a.m. and walked in the back door. Right away she saw someone she did not know. A man with a mask, a hood over his head and gloves was standing in a corner.

With tears streaming down her face as she relived what happened, Harvey said she saw he had a gun in one hand and a knife in the other.

The area where the armed would-be robber was standing.

"He said something, but he didn't say open the door, or didn't say give me your money," Harvey recalled, "I don't know what he said, because I just reacted."

Surveillance video shows she quickly lunged at the man and grabbed his gun.

"Grabbed the gun, his wrist where the gun was in, then I grabbed the knife and then we got to tussling," Harvey said.

In a matter of seconds, the restaurant's surveillance video shows she had him out the back door and running away.

"I could have been dead. That's what goes through my mind," Harvey said.

She ran to get back inside and called her boss who then called the sheriff's office.

Within the past week, deputies have been responding to similar crimes. On Thursday, after 11 p.m., they say a man with his face covered in a bandanna and armed with a knife tried to rob two employees leaving the Dollar General on Cleveland Road.

A man with his face covered in a bandanna and armed with a knife tried to rob two employees leaving the Dollar General on Cleveland Road.

Just around the corner from that location, a 23-year-old woman was robbed at gunpoint by a man in a grayish colored hooded sweatshirt and a bandanna over his face.

That happened Sunday about 6:30 p.m. at the Cash Points on Commerce Parkway.

A woman was robbed at gunpoint Sunday by a man at the Cash Points on Commerce Parkway.

They say the man demanded $500. She told him she didn't have that much and withdrew $300. At that point the suspect said he was sorry and said the money was for his family before he drove off.

At this time, investigators do not think the three crimes are related.

The owner of the draft house said the business doesn't encourage employees to react the way Harvey did, but he knows she just reacted in a matter of seconds.

He also said that they've had their surveillance system in for 10 years and have never needed it for anything like this before. He's also planning to make that back area more secure.

The manager noted that restaurants don't usually carry a lot of cash these days since most transactions are with credit cards.

As for Harvey, she continued to finish her shift, choosing to spend her day in the comfort of supportive employees and thankful for the distraction it gave her from what could have happened.