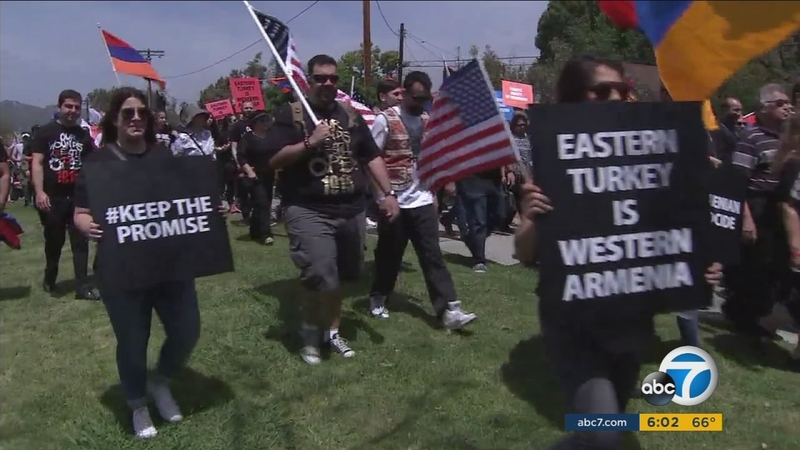 LOS ANGELES (KABC) -- Tens of thousands of people participated in rallies and marches in Los Angeles on Monday to commemorate the 102nd anniversary of the Armenian genocide.

One event, the Armenian Genocide Committee March for Justice, started at Pan Pacific Park on Beverly Boulevard at noon. Thousands of participants then marched a mile and a half to the Turkish consulate on Wilshire Boulevard.

About 1.5 million Armenians died at the hands of the Ottoman Empire in Turkey in 1915.

The Turkish government denies there was a genocide. The United States, which counts Turkey as a key NATO ally, does not officially recognize the term genocide for those events, though the state of California does.

On Wilshire Boulevard, a sea of Armenian flags flew over the crowds, as various speakers called for the U.S. government to recognize the genocide.

A small group of Turkey supporters also showed up, and a plane flew overhead with some anti-Armenian messages. There were some clashes between the groups, with water bottles thrown and a handful of people taken into custody.

"We want the message to be heard from Mount Hollywood all the way to Mount Ararat, that we stand together," Garcetti told the crowd.

At a related event, thousands of people participated in the Unified Young Armenians March for Justice and the Armenian Genocide Committee March for Justice. The march began at the intersection of Hollywood Boulevard and Western Avenue in Little Armenia at 10 a.m.

"I just think it's very important for our kids to know our history," said one marcher, Paytsar Nagapetyan. "If we don't discuss this it's like not discussing slavery. It's that important to us that our kids know our history and that they understand that we are Armenian and we're going to continue surviving and that nothing can stop us."

President Donald Trump issued a statement on Armenian Remembrance Day which said in part, "I join the Armenian community in America and around the world in mourning the loss of innocent lives and the suffering endured by so many."