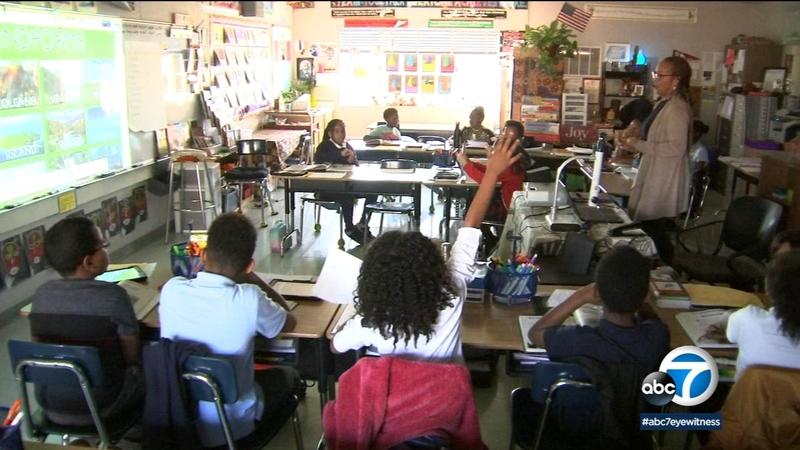 BALDWIN HILLS, LOS ANGELES (KABC) -- Once struggling with academic performance, an elementary school in Baldwin Hills is now thriving after teachers took a step back and tailored the curriculum to the students.

Since adopting the new curriculum in 2016, student performance at Baldwin Hills Elementary School has dramatically increased.

Stacey Joy, a teacher at the school, decided to switch things up in the classroom when she noticed a lack of enthusiasm from students.

"The kids were like so excited, like you could tell that it's like, get us away from those old funky books and let's do something new and fun," said Joy.

That meant a new curriculum that embraces and incorporates the African-American identify and experience into daily lesson plans.

"We're really excited about it. We have over 82% of students of African descent and traditionally when you're talking about black families and Latino families, the common trend has been their underachievement," said Dr. Letitia Johnson-Davis, the school's principal.

The curriculum is more rigorous for students and teachers and it's in constant revision as teams of educators assess what works and what doesn't. Parents also play a key role.

In fact, it was parents and educators together that initiated the shift, making Baldwin Hills elementary a pilot school still under the LAUSD umbrella - but with the autonomy to shape its own educational program.

Tünette Powell says her son used to struggle with writing but not anymore.

"The 4th grade teacher started using poetry and hip hop to get him to fall in love with writing and to find his voice. He starts getting fours in writing and I'm just like oh my god, and now he's so arrogant about his writing as if he's always been good at it," she said. "But it's like that's just an example of being able to bring in curriculum that is relevant and that is culturally relevant and means something to kids. That's been really important for us."

Alicia Montgomery, the executive director for the Center for Powerful Public School who studies the roughly 40 pilot schools in LAUSD, says Baldwin Hills is getting it right.

"The idea that the expertise is in the room and how we use that expertise to create better outcomes for students is critical and absolutely can be replicated," she said.
Report a correction or typo
Related topics:
educationbaldwin hillslos angeleslos angeles countyeducationcalifornia department of educationmathabc7 solutions
Copyright © 2022 KABC Television, LLC. All rights reserved.
TOP STORIES
LA County could hit 'high' COVID level in July, prompt return of masks
Here's what to know about the end of CA's eviction moratorium
California late start law aims to make school less of a yawn
LAX expected to be second busiest US airport over July 4th weekend
WNBA's Brittney Griner's trial starts in Russia court
2nd visitor in 3 days gored by Yellowstone park bison
Woman searching for brother reported missing in Redondo Beach
Show More
How to stream ESSENCE Fest live on Hulu
Long Beach softball team headed to state championship
Lawyer: Nipsey Hussle lifted up neighborhood he was gunned down in
Spike in mass-overdoses, teen deaths due to fentanyl, DEA says
Apple's newest CarPlay feature will make buying gas easier
More TOP STORIES News