6 hospitalized, including firefighter, after being stung by bees in Monterey Park 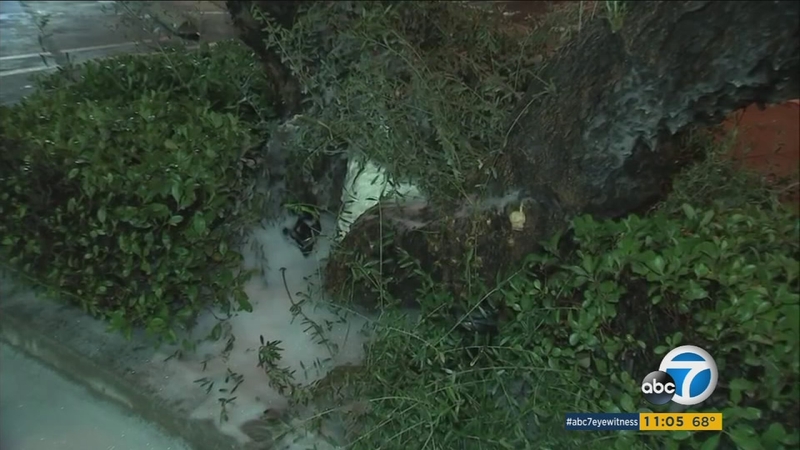 6 hospitalized, including firefighter, after being stung by bees in Monterey Park

MONTEREY PARK, Calif. (KABC) -- Six people, including a firefighter, were hospitalized Saturday afternoon after being attacked by a swarm of bees in Monterey Park.

The incident started around 5:30 p.m. in the 200 block of North Atlantic Boulevard, according to Los Angeles firefighters.

Firefighters had responded to reports of multiple people being stung by bees in the parking lot of a Ralph's grocery store.

Ed Hsu was working in his food truck when he saw the massive swarm.

"They all came from the bush. It was a lot," he said. "I saw like a lot of bees flying around in the parking lot and then I heard somebody got stung by bees and they were rushed to the hospital."

Shoppers were in the parking lot when the bees started to attack people. Video sent to Eyewitness News by a viewer shows a firefighter and shoppers inside the grocery store waiting out the bees. One man was holding an ice pack on his head.

A food truck employee heading to work was kept at a safe distance by police. She said the scene was chaotic.

"There was this gigantic mob of bees chasing people around. People were screaming and trying to go inside or trying to leave," Isabel Hernandez said.

Monterey Park fire Capt. Neil Lankin said when he arrived, other firefighters were already being attacked by the bees.

"On my arrival, there were two engine companies and a truck company that were being actively stung by bees that were swarming, agitated, and actively protecting themselves," he said.

Six people, including a Monterey Park firefighter, were taken to a hospital for treatment. Firefighters were wearing protective gear and sprayed a tree where the hive was repeatedly with foam. They then took steps to prevent further problems.

"What we've done, I went in and sealed any areas that bees were congregating with some high-density foam and we used firefighting foam to suppress any bee behavior," Lankin said.