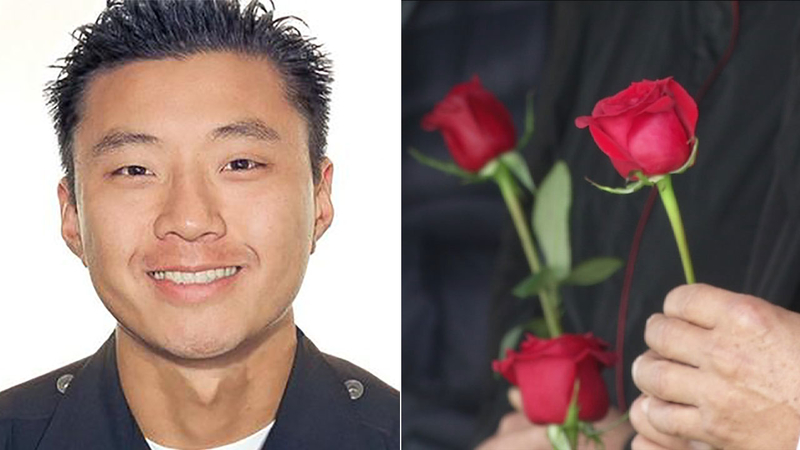 Dozens of family, friends and LAPD officers gathered to remember Lee and place roses on his grave.

The father of two was killed on March 7, 2014 when a runaway truck plowed into the side of his Hollywood Division LAPD patrol car near Robert Lane and Loma Vista Drive in Beverly Hills. His rookie partner was also critically injured.

Lee immigrated from Korea with his parents at the age of 6 and grew up in Koreatown. After graduating from Cal State Fullerton in 1996, he joined the LAPD in 1998. He was a 16-year LAPD veteran who received more than 70 commendations.

"Nick Lee was a man, a father, a brother and really a friend," LAPD Capt. Andrew Neiman said. "The officers that you see here today knew Nick Lee not just as a police officer but as a personal friend and someone who truly served this community, so to be here is an honor for us -- to pay tribute to him and to honor his family. We'll continue to do that for as long as we can."

"My big brother, I miss him a lot. He was always there for us. He's our guardian angel now," he said.

The driver of the big rig, identified as Robert Maldonado, was charged with gross vehicular manslaughter last year. He's due in court in April for a preliminary hearing.

Prosecutors say Maldonado failed to properly maintain and inspect the truck after the vehicle's brakes failed. Maldonado faces up to six years in prison if convicted.

The LAPD detective killed in a cement truck accident on Loma Vista Drive in Beverly Hills on Friday, May 9, 2014, was identified as Ernest L. Allen Sr.

Loma Vista Drive was the scene of another tragic accident just two months later when Ernest L. Allen Sr., an off-duty detective for the LAPD, was killed when a cement truck collided with his private vehicle.