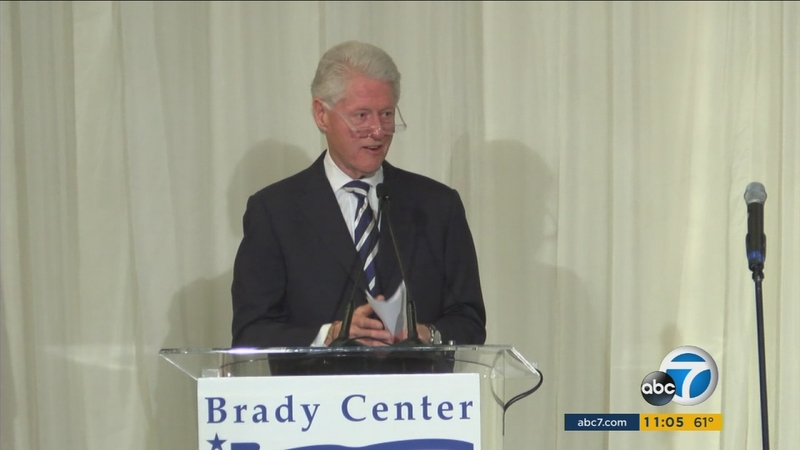 The Brady Center to Prevent Gun Violence, which is co-chaired by Brad Pitt and director Adam McKay, honored the 42nd President of the United States 20 years after he signed a gun control measure called the Brady Bill.

"We have to be a humane society. There have to be some things we can agree on," Bill Clinton said to the crowd.

Organizers said the event shows how Hollywood is united for more gun safety. But stars were clearly divided over who should be the Democratic presidential nominee.

Some Hollywood A-listers were set with Vermont Sen. Bernie Sanders.

Several celebrities told ABC7 they were not quite ready to choose between Sanders and Hillary Clinton.

"Because the California primary is all of a sudden rather important, I'm sort of still taking my time," actor Colin Hanks said.

"I don't yet know if I feel the Bern, or if I'm with her," actress Jenna Fischer said.

Earlier on Wednesday, Bill Clinton campaigned on behalf of his wife in Koreatown. With Donald Trump becoming the final GOP candidate left in the field, the former president said the billionaire should not be underestimated.

"I don't underestimate anybody. The main thing we should be doing is finishing the primary and working hard to do it," Bill Clinton said.

"My message to young people is she's got the best economic program that will help most of them, her college loan program, it helps more people and it can actually has a chance of being enacted," Bill Clinton stated.