ABCNews
By Will Reeve and Morgan Winsor 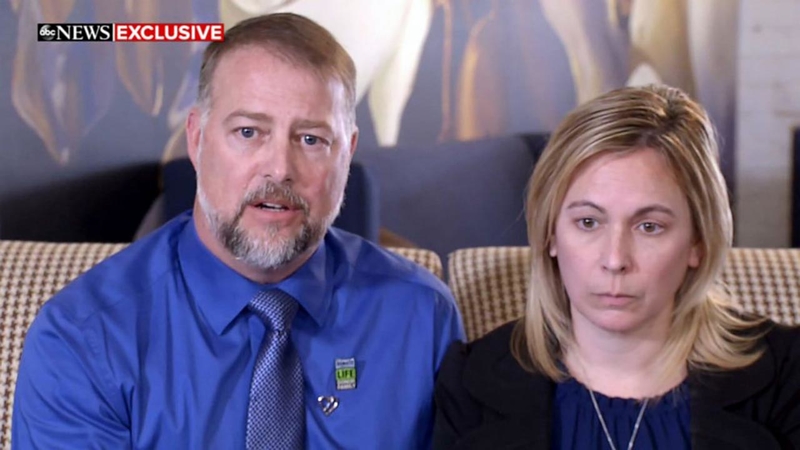 "There is a piece of my heart that's gone. It's just unimaginable, I can't even explain to you," his mother, Shari, told ABC News in an exclusive interview airing Wednesday on "Good Morning America."

Stone, a sophomore business major, had decided to join a fraternity in February, choosing to pledge for Pi Kappa Alpha's Delta Beta chapter. His family said they had "many conversations" to make sure he was "doing it for the right reasons."

Stone's mother says she grew worried two weeks before Stone's death when her son was supposed to make the two hour drive home to Columbus to watch the family's dogs for the weekend, but couldn't leave Bowling Green until 2 a.m. because the fraternity wouldn't let him. Then, on March 4, Stone told Shari about a drinking ritual scheduled for that night he said he felt forced to participate in.

The mother said she texted Stone that evening to check in.

"And that was the last conversation I had with him," she said.

The parents said they got a call around midnight that their son had become unresponsive after drinking.

"He was found not breathing," Stone's father, Cory, told ABC News. "They had to revive him and he [was] on a ventilator, keeping him alive."

Stone was admitted to ProMedica Toledo Hospital in critical condition, a hospital spokesperson told ABC News at the time.

Cory said he held his wife's hand during the drive there, "praying in my mind that Stone was going to be OK."

"No parent should have to sit in their car wondering if their son is going to be OK," the father said.

A Bowling Green State University student, who spoke to Toledo ABC affiliate WTOL on condition of anonymity, said his roommate had been pledging Pi Kappa Alpha and had told him about the event that's now at the center of an investigation, saying pledges were told to drink an entire handle of alcohol before they could leave. A handle contains around 40 shots.

After spending four nights in the hospital, Stone was declared brain dead, his parents said.

Despite their grief, the family agreed to donate Stone's organs so that others may have a second chance at life. The family's attorney, Rex Elliott, told ABC News that Stone's heart and kidneys have already been successfully transplanted.

Stone's parents believe he was "forced" into the fatal drinking and said they ultimately hold the international fraternity accountable for what happened.

"The outcome is he was murdered," Shari said.

They are now calling for colleges and universities nationwide to enforce a zero-tolerance policy for hazing.

"Shut everything down and make the fraternity show that they have a zero-tolerance and there's guidelines you need to follow," Cory said. "Every day that goes by, there's a chance there could be another Stone Foltz out there."

"There needs to be harsher punishments," Shari added.

Elliot said they will be seeking criminal charges.

"Justice looks very much to me like the criminal process, those involved in this ritual charged with crimes," Elliot said.

In the wake of Stone's death, Bowling Green State University placed the fraternity on interim suspension for alleged hazing activity as the school and police conduct investigations into the incident. The university also suspended all new member intake processes as well as on- and off-campus social events of all fraternity and sorority chapters, according to Solis.

Pi Kappa Alpha, which has over 200 chapters in the United States and abroad, said it has placed its Delta Beta chapter at Bowling Green State University on "administrative suspension and advised its leaders to cooperate fully with University administration and local law enforcement."

"The Fraternity has a zero-tolerance policy toward illegal activity, substance abuse, bullying, and hazing of any kind," the organization said in a statement earlier this month. "As more details are confirmed, we will also pursue permanent suspension of Delta Beta Chapter as well as expulsion of all chapter members from the International Fraternity. The International Fraternity will cooperate fully with authorities as this incident is investigated and will consider every possible course of action to hold the chapter and individual members accountable to the fullest extent in accordance with the International Fraternity Constitution and Codes."

Stone's mother said members of the fraternity who were with him on that fateful night need to "step up," "take ownership" and "explain what went on."