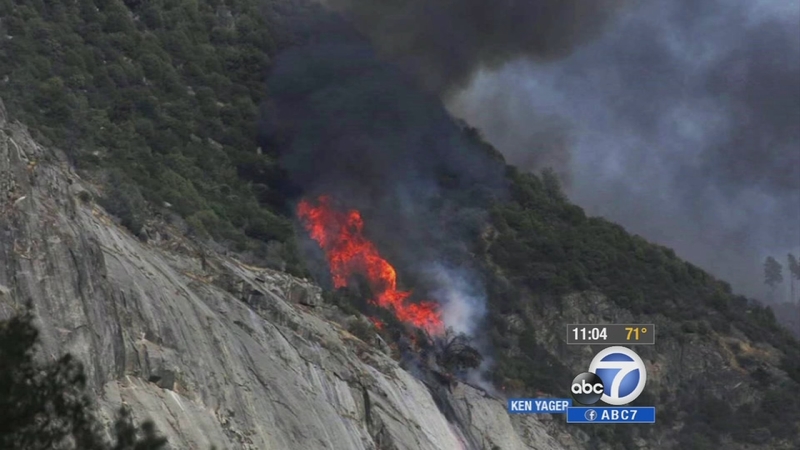 Park spokesman Scott Gediman says the plane crashed at about 4:30 p.m. within a mile of the park's west entrance.

The pilot was the only one on the plane when it crashed. His identity has not been released pending notification of kin, but officials say he worked for a company that provides pilots for all CalFire planes.

Several nearby residents heard an explosion and witnessed the aftermath.

"We watched the whole thing, we saw sparks down the whole mountainside, and then a huge black cloud of smoke and then we watched all the parts of the plane roll off the mountain and down into the highway," restaurant manager Kyle Miller said.

A California Highway Patrol officer who witnessed the crash said it appeared the pilot was preparing to make a retardant drop to stop the spread of the wildfire when the aircraft slammed into the canyon wall. Rescuers worked their way through extremely steep terrain to reach the crash site.

The Cal Fire airtanker was a Grumman S2T, which can hold 1,100 gallons of fire retardant, a spokesman said.

"Our thoughts and prayers are with the pilot's family during this difficult time," said Jeff Cavarra, program director for DynCorp International.

The wildfire burning near Foresta prompted the park service to evacuate 60 homes as the fire spread to 150 acres. The fire has also closed Highway 140 into Yosemite.

The fire is located along Highway 140 between Yosemite View Lodge and the Yosemite Arch Rock Entrance, below the town of Foresta. Authorities said the 60 evacuated homes are privately owned, but most are vacation rental homes.

CalFire says it will be cooperating with the National Transportation Safety Board on the investigation into the deadly crash.