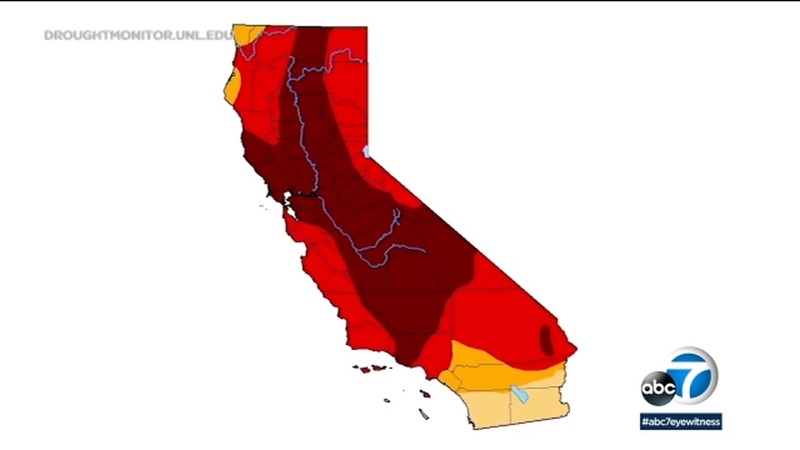 IRVINE, Calif. (KABC) -- Californians reduced water usage an average of 5% in the month of August, but more needs to be done as parts of the state face dire drought conditions.

Gov. Gavin Newsom on Tuesday announced the entire state of California is in the middle of a drought emergency following the state's second driest year on record.

Dr. Janine Baijnath-Rodino with the UCI Civil and Environmental Engineering Department said California isn't the only state with this problem.

"Definitely, the Western U.S. is seeing a greater increase in drought than the Eastern U.S. as of right now," Dr. Baijnath-Rodino said.

This declaration comes in the wake of record-breaking heat and drought in the state for the second year in a row.

Newsom's proclamation allows the State Water Resources Control Board to ban wasteful water practices, including the use of potable water to wash sidewalks and driveways.

A map from the U.S. Drought Monitor shows nearly half of California in a state of exceptional drought in mid-October. No part of the state had reached those levels the previous year.

In July, the governor asked Californians to voluntarily cut down their water use by 15%. They responded by cutting urban water use by 5% in August, when compared to the same month in 2020.

Dr. Baijnath-Rodino said we'll need a lot more to help the state get out of the drought.

"For the summer, already, we've seen over 8,000 wildfires, over 2 million acres burnt already and that alone is especially due to the really dry fuel and dry foliage, due to the drought conditions that we've been seeing," she added.

The post-doctorate research scientist explained drought increases wildfire activity and intensity and that in turn creates the opportunity for even more drought.

Our soil is too dry to take in the little rain we've seen and this creates an increased risk for mudslides.

"The soil no longer absorbs that precipitation and rain like a sponge. Instead, it kind of just trickles off and runs off so that does not help our drought conditions that we're seeing right now either and that also adds to this positive feedback loop for the next fire events to actually continue and intensify," Dr. Baijnath-Rodino said.

In addition, Dr. Baijnath-Rodino said meteorologists expect us to go into a dry La Niña winter.

Following the governor's announcement, the general manager of the Metropolitan Water District says they'll consider whether to require mandatory conservation from their members during their meeting in November.