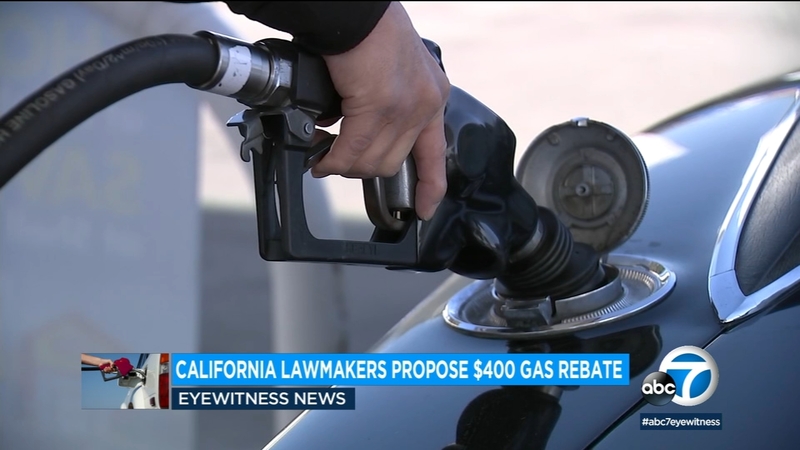 LOS ANGELES (KABC) -- Help could be on the way to try and off-set the high gas prices seen throughout the state, including Southern California, in the form of a proposed gas rebate.

State lawmakers announced the proposal on Thursday. The 10 California Democrats bringing the proposal forward say that they will use $9 billion of the state's budget surplus to provide a $400 rebate to every California tax payer.

The rebate would cover the state's current gas tax for an entire year for cars with 15 gallon tanks.

Lawmakers also said the proposal would ensure taxpayers who use "public transit, active transportation options, and zero-emission vehicles" could receive the rebate.

Those behind the proposal call it a better approach than suspending the gas tax, a move they say would severely impact funding for important transportation projects, and offers no guarantee that oil companies would pass the savings on to consumers.

Some welcome it, other are left asking what the catch is.

"For most vehicles, for most Californians, this $400 rebate is equivalent to a one year tax-gas holiday," said Assemblywoman Cottie Petrie-Norris, who represents District 74 in OC. "We know too many Californians are struggling to make ends meet right now. We are here to offer help. We are here to deliver solutions."

"Money. If the state wants to give me money, I'll take it. It'll help. Why not?" said Lenny Rosenblatt.

Other drivers told Eyewitness News the rebate may not matter if gas prices continue to rise. Some politicians have shut down the idea of getting rid of the gas tax.