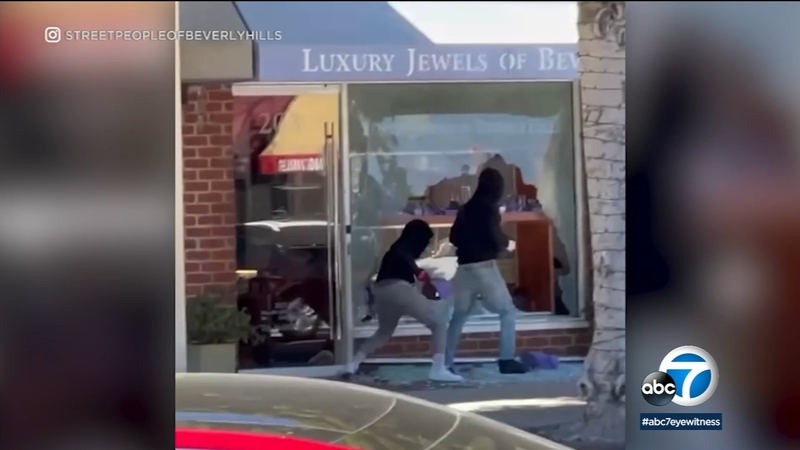 LOS ANGELES (KABC) -- With smash-and-grab robberies and other retail theft crimes escalating in California, the state is focusing efforts to combat the crimes.

State officials announced Friday that they've nabbed bandits involved in one of the biggest crime rings in the state.

"We have taken down and are prosecuting a statewide organized retail theft ring involving defendants who stole more than $1 million worth of jewelry from stores in nine counties across California," said State Attorney General Rob Bonta.

Bonta says the ring leaders of the organized retail theft ring are finally off the streets and with the formation of a new multiagency enforcement team to combat such crimes, others involved in such illegal activity will be brought to justice as well.

"We have secured felony guilty pleas for two of the ring leaders of this criminal enterprise and we've filed charges against two others," Bonta said. "These charges and guilty pleas are a result of an investigation involving the CHP's organized crime retail crime task force."

The task force, including the California Highway Police and other law enforcement agencies, found plenty of evidence in this latest bust.

"As a result of this investigation, law enforcement located evidence in the defendants' homes, including jewelry that linked them to retail thefts at multiple JCPenney and Sam's Club stores, resulting in more than $1 million in losses to these businesses," said Bonta.

Since forming the task force, they've put put a major dent in the organized crime rings.

"We have -- as an agency, as a task force -- participated in 1,031 separate investigations, resulting in 449 arrests," Ramos said. "We've also contributed to the recovery of over $21 million worth of merchandise."