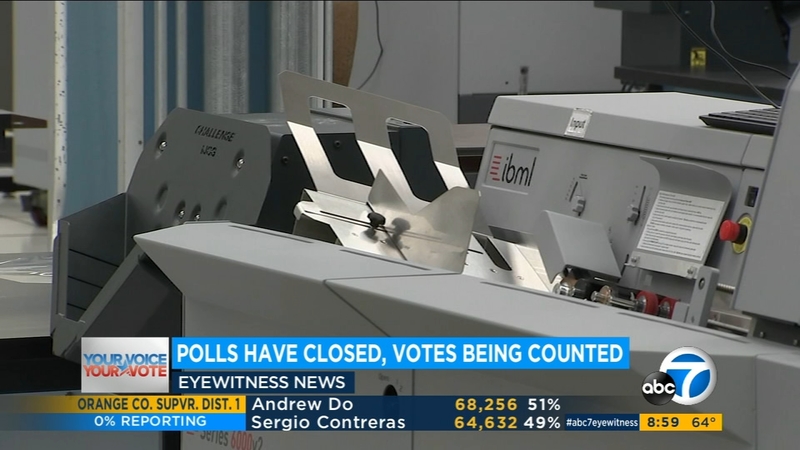 NORWALK, Calif. (KABC) -- No major delays had been reported at voting centers in Los Angeles and Orange counties as polling places closed throughout California as scheduled on Tuesday evening.

L.A. County's chief elections official, Dean Logan, said the "10-day early-voting period, combined with vote-by-mail, really is playing out the vision of our Voting Solutions for All People initiative."

At the secure Downey location where the county's votes were to be counted, officials were awaiting the delivery of ballots -- by air and on the ground -- from more than 650 voting centers. Mail-in ballots that were already prepped were to be the first to be counted.
EMBED More News Videos

The Los Angeles County registrar said at least 215,000 people voted in person at polling centers throughout the county on Election Day, with no major delays reported.

The Los Angeles Police Department declared a citywide tactical alert Tuesday afternoon as voters made their way to the polls, though the agency said the precautionary decision was "to ensure sufficient resources to address any incidents that may arise as a result of Election Day activities, but is not a result of any specific incident."

In a brief statement on Twitter at 3 p.m., the LAPD said it was "committed to ensuring that adequate resources are available to ensure all Angelenos are able to safely vote without interference" and would "continue to assess the needs to maintain a tactical alert based upon the needs and state of the city."

The coronavirus pandemic has transformed Election Day into election month for many places across the state. County election officials mailed ballots to all active registered voters for the first time this year to encourage them to avoid in-person polling places during the pandemic.

There's little drama at the top of the ticket, where Democrat Joe Biden is expected to easily win the state's 55 electoral votes. Elsewhere, voters will decide the fate of a dozen ballot measures and some closely contested U.S. House races.

At the L.A. County Registrar-Recorder's offices in Norwalk, those who showed up said they prefer to cast their ballot in person on Election Day.

"Things get lost in the mail and I just didn't feel comfortable mailing in my ballot, so (I) just waited until today," said Norwalk resident Jeannette Taylor.
Those voters will be given hand sanitizer before entering the polling sites and can expect other COVID-19 safety measures.

"Bring your mask. Expected poll workers to be outfitted in PPE, hand sanitizer for everybody and yes, the voting equipment will be wiped down and sanitized before and after every voter, but that may add a few more minutes to the experience," said California Secretary of State Alex Padilla.

Padilla also noted it's important for people to know their rights as voters.

"As long as you're in line by 8 o'clock on election night, you will get an opportunity to vote," he said.

Voters can still drop off ballots at official drop box locations and eligible individuals who have not registered to vote can also do so Tuesday.

"For close contests and final numbers, it's going to take at least a few days, maybe even a couple of weeks," California Secretary of State Alex Padilla says about election results.

Although many will be anxiously awaiting the election results, particularly in the presidential race, Padilla says close contests could take days or weeks to count.

"If the presidential contest is too close to call on election night, it's not the time to panic," Padilla said. "It's the process running its course, and I would caution to anybody about candidates claiming victory when there's still a lot of ballots that remain to be counted."

At the L.A. County Registrar-Recorder's office in Norwalk, those who showed up showed said they prefer to cast their ballot in person on Election Day.

"Things get lost in the mail and I just didn't feel comfortable mailing in my ballot, so (I) just waited until today," said Norwalk resident Jeannette Taylor.