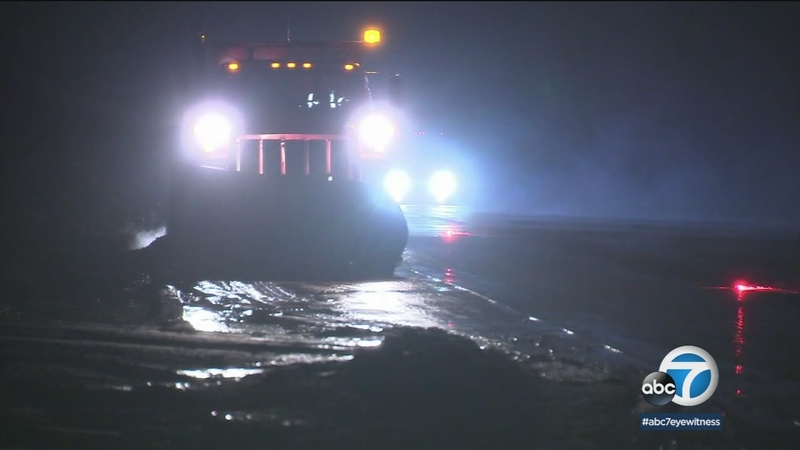 VENTURA, Calif. (KABC) -- A flash flood warning was issued for Ventura, Santa Paula and Ojai Thursday night amid heavy rains that inundated the area from a spring storm.

Residents living in or immediately downstream were urged to take immediate precautions to protect life and property. They were advised to quickly move away from the burn area only if it is safe to do so, otherwise shelter in place and move to a second story or the highest location in your home to stay out of the path of fast-moving water and debris flows.

There were also reports of mud in lanes of the northbound 101 Freeway near the Mussel Shoals exit. The flow did not stop traffic or close down the highway, but motorists were urged to drive carefully. A Caltrans crew was sent to clear out the debris.

Juan Gonzalez and his wife were driving near Faria Beach when their vehicle spun out of control and flipped over. He said he didn't know there was mud in the lanes until it was too late.

"We just touched the mud and we slid a couple times and then we flipped like two or three times," he said.

Gonzalez and his wife did not suffer any injuries, but she did complain of back pain.

School closures were announced late Wednesday over concerns of possible debris and mud flows Thursday. Those campuses were expected to reopen Friday morning.

Santa Barbara County lifted evacuation orders for burn areas, after a powerful rain storm soaked the region but didn't cause the widespread flooding and damage that had been feared.

With a forecast of the biggest rainfall of the season, the county had ordered evacuations in areas affected by the recent massive brush fires, fearing a repeat of the deadly flooding and mudslides that struck Montecito earlier this year.

But that did not appear to be the case. The county's flood control channels and debris basins appeared to do their job, officials said.

Meteorologist Mark Jackson with the National Weather Service said some rainfall would continue Thursday night, but is not expected to create any additional danger.

"We're not expecting any of those rainfall rates to produce anything more than some minor debris flows that are not considered to be significant, especially within the populated areas," Jackson said at a Thursday afternoon media briefing.
Jackson said the county did get significant rainfall amounts - 2-5 inches in most areas of the county and 4-6 inches in the mountains. Some areas up the central coast even saw 8-10 inches, he said.

But there were only a few reports of intense, heavy rain falling in the most vulnerable burn areas, and in those cases the flood control systems did their job, he said.

Additionally, Sheriff Brown warned the public about a fraudulent effort by someone to gain access to people's homes during the storm.

Someone was passing around a flyer in Santa Barbara telling people that "land technicians" would need to gain access to their homes.

The flyer was a fake, Brown said. No one from a county agency was attempting to gain access to homes during the storm.

"This is not an official document," Brown said. "This is something that's been cut and pasted together. The attempt to use this is presumably to gain access to someone's property for nefarious purposes."