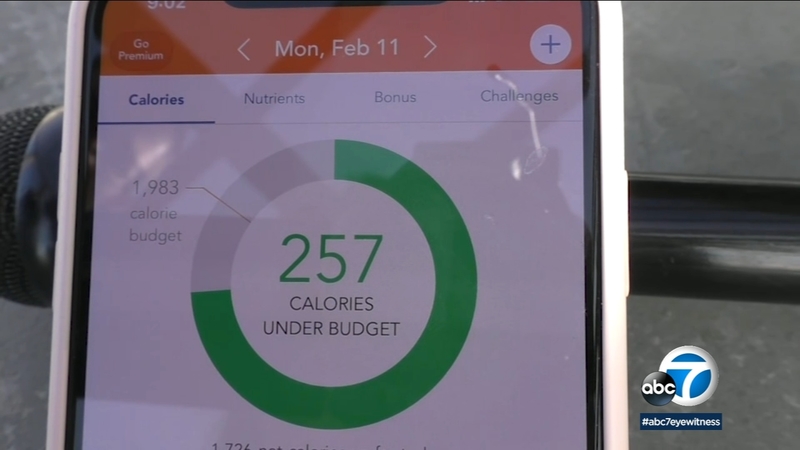 Jeffery Rosenthal tried many diets with little success. After dealing with an infection that wouldn't heal, he thought it was time to make some changes in his diet, which meant giving up his love of sodas and junk food.

"I tried a lot of diets before. I tried Paleo, I tried a little Keto. I needed something that was going to keep me accountable, even though I have to do the work, because I've failed in the past," said Rosenthal of Fullerton.

Like many 20-year-olds, he spends a lot of time on his phone. So he searched for an app to help him shed the weight.

He discovered "Lose it," an app that helps you track your food and exercise, which is free for the basic plan. He dropped 130 pounds.

"It gave me an idea of how much I could eat in the day," said Rosenthal.

Rosenthal combined the calorie counting with using a Fitbit for walking. He used one app for keeping calories in check and one to keep his activity accountable.

"It reminds me to get up every hour and take steps to get my steps in," Rosenthal said of his Fitbit.

And while that seems to be his winning combination, nutrition expert Dr. Jonny Bowden says there is more to it than that.

"The first thing I would say about Jeffrey or anybody like that is that you never argue with success. But I would say for most, calorie counting is kind of yesterday technology," said Bowden.

While Bowden agrees that calories count, it's important to look at the quality of those calories, which are equally important for your body's blueprint.

This is a big reason why cutting back on calories alone may not be enough to lose weight. Rosenthal still keeps things simple, but now keeps a food journal and checks out the calorie count on menus when he eats out.
Report a correction or typo
Related topics:
food & drinkdietinghealthfood coachcircle of healthnutritiondiets
Copyright © 2022 KABC Television, LLC. All rights reserved.
CIRCLE OF HEALTH
CDC says US death toll from COVID-19 hits 1 million
COVID cases rising in US; many eligible for booster are uninterested
Mobile vaccine clinic comes to Lynwood amid effort to prevent surge
What is alopecia? Some of those living with the disease speak out
TOP STORIES
'Out of a 007 movie': OC suspects had car with license-plate flipper
Driver must stand trial for deadly Tesla crash in Gardena, judge rules
Trump pays $110K fine, but must submit paperwork to end contempt
Celebrate National Streaming Day with Hulu for $1/month for 3 months
United cancels couple's flight, charges $4K more for same seats
Man killed in fire at recording studio in Hollywood, authorities say
LA County moves into higher risk category as COVID cases rise
Show More
IE school employee accused of providing fentanyl to students
Wild shootout at Montebello 7-Eleven store caught on video
'Top Gun' house in Oceanside reopens as retro pie shop
Funerals begin for victims of Buffalo supermarket shooting
Disney celebrates National Streaming Day with drone show over DTLA
More TOP STORIES News