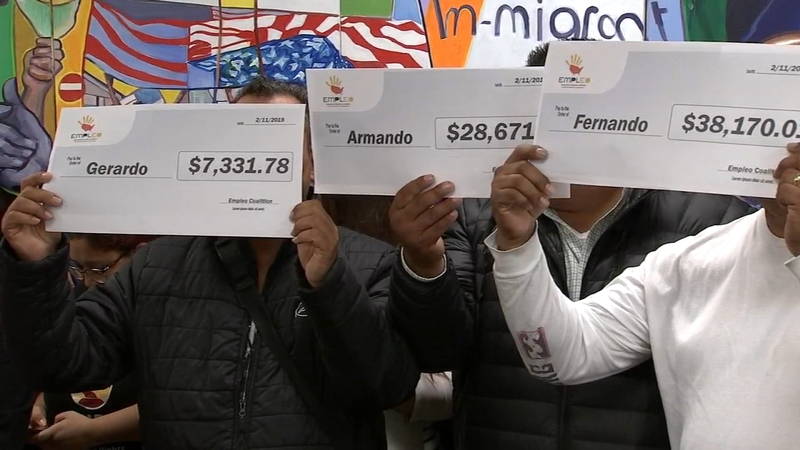 AGOURA HILLS, Calif. (KABC) -- Hundreds of car wash workers are receiving checks this week for back pay, and three of them spoke with Eyewitness News about it.

They did not show their faces on camera or provide their last names because one of them still works for one of the car washes named in the settlement.

Gerardo said he's glad the money is finally coming and it'll help him and his family in Mexico.

Immigrants' rights groups and the U.S. Department of Labor accused Delrahim of not paying employees overtime and having them clock out when there were no customers.

The case was settled last summer for $4.2 million and Delrahim fined $400,000. At the time, the owner said in a statement that he didn't want to go through an expensive civil trial.

"You have rights. If you work in the United States, you deserve your paycheck at the end of those hours you worked," said Angelica Salas, executive director of CHIRLA.

According to the U.S. Department of Labor, the settlement sends a message to immigrant communities that their immigration status, whether legal or undocumented, means they have rights.

"One of the main things that we are working on here with our community partners is to make sure that the money gets back into the hands of the workers," said Marc Pilotin, with the U.S. Department Of Labor.

Fernando will be receiving nearly $40,000. Through an interpreter, he talked about what he plans to do with the money.

"I will use this money for my son's college education because semesters in school are very expensive," he said.

According to the settlement, ownership does not admit it did anything wrong.