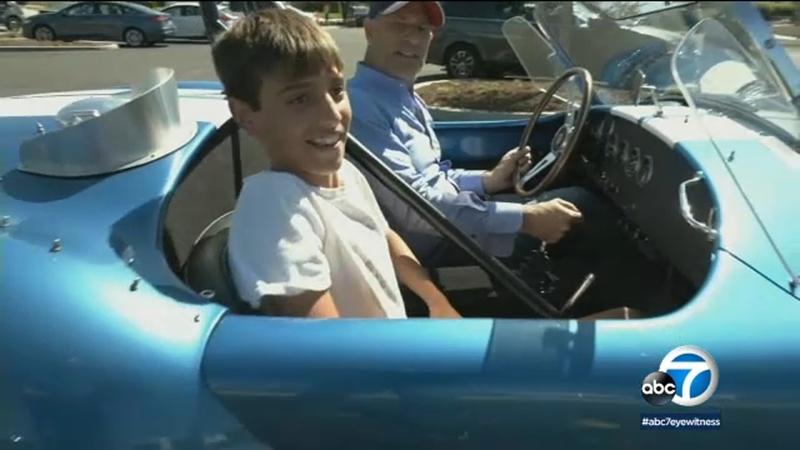 CASTAIC, Calif. (KABC) -- For race car fans, Carroll Shelby is a magical name. Those fans include a 12-year-old boy who wrote about Shelby for a school assignment.

There was a small assembly for some students at Live Oak Elementary School in Castaic; a history lesson from a couple of guest educators.

"We are here to talk about my hero, Carroll Shelby," Scott Black, head of public relations and marketing for Shelby American, told the sixth graders.

Black was there to share the story of the legendary Shelby, as portrayed by Matt Damon in the Oscar-winning film "Ford v Ferrari."

The seed for this in-person telling of Shelby's real story started with 12-year-old Jacob Lensch, who submitted a short essay and drawing at the beginning of the school year. The question for all the students: what year would you like to go back and visit, and why?

Unbeknownst to him, his teacher, Rene Giminez, is a longtime Shelby enthusiast who races a tribute 1968 Mustang on weekends. The vintage car is modeled after the Trans Am competition cars of the late 1960s.

Almost any classic Ford Mustang is worth good money these days. But one particular Mustang is worth a fortune, because the late Steve McQueen drove it into movie immortality more than 50 years ago.

Gimenez was so impressed with Lensch's story and illustration, he posted it on the Shelby American Automobile Club's Facebook page for fun. From there, things really accelerated.

"The next thing I knew, literally in 24 hours, I had well over 150 responses. So many comments, so many kind comments," Giminez said.

The people at Shelby American took notice, and offered to visit the school. Black was accompanied by Tracey Smith, Executive Vice President of Shelby International. The pair do many events each year, often speaking to kids and young people about Shelby's career and accomplishments.

Their PowerPoint presentation was fun for the students, but then, the kids got to head outside to check out not only Gimenez's Mustang, but an authentic Shelby Cobra, brought right from Shelby American's in-house collection. It was a close-up look at versions of the cars many of them had seen on the movie screen in "Ford v Ferrari."

Shelby passed away nearly 10 years ago, in May 2012, but his legacy lives on. Especially in his mission to inspire and help young people.

The three-day 47th running of the Acura Grand Prix of Long Beach begins Friday with qualifying for the Porsche Carrera Cup North America and IMSA races and the start of the drifting competition.

"The last things he did in his life was to really work on his foundation. Not only to help kids that needed heart transplants, but also kids that wanted to pursue an education in automotive," Smith said as she addressed the sixth-graders.

Lensch is one student who'd like to run with that.

"I want to do something in cars. I really like cars. Maybe design cars, I've always really liked to draw," he said.

After the lesson and the dismissal bell, Scott Black gave Lensch a VIP ride around the school's quiet Castaic neighborhood, in the very type of car that Carroll Shelby created some 60 years ago.

"Best school day ever," Lensch said as he climbed out of the rumbling Cobra afterward.