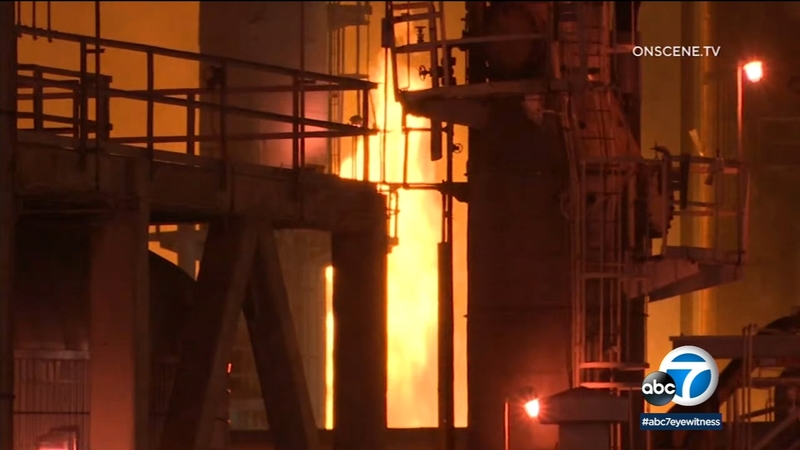 CARSON, Calif. (KABC) -- Some Southern California residents were wondering if gas prices and air quality in the Carson area will be impacted by the massive inferno that erupted at a petroleum refinery following an explosion late Tuesday night.

The blaze broke out just before 11 p.m. at the Marathon Petroleum refinery in the 2300 block of East 223rd Street. The Los Angeles County Fire Department said there was an explosion before the fire erupted in a cooling tower at the refinery, though the cause of the blaze remains under investigation.

Officials said Wednesday morning that there should not be a significant impact on overall production at the refinery. Marathon spokespersons said most of the facility is running, and the material was not gasoline or diesel fuels. The unit involved mostly feeds methane and light hydrocarbons. As a result, there was not an immediate concern over gas prices rising.

Gas prices in areas across the Southland have topped $4, with the average in Los Angeles County at $3.56, according to AAA.

The last time gas prices spiked following a refinery fire was in 2015, when a large blaze broke out at the Exxon Mobil refinery in Torrance. In that incident, in which the explosion was so strong that it registered as a 1.7-magnitude earthquake, the flames were likely fueled by gasoline.

Hazmat crews monitored conditions at the Carson refinery overnight, with fire officials saying the health risk to the community appears to be low.

"We did not have any detectable levels of chemicals going outside the perimeter of the refinery, so there was never a danger to the public for any type of respiratory exposure," L.A. County Fire spokesperson Tony Imbrenda said.

Imbrenda added that though people in the area do not need to worry about respiratory hazards, it is recommended that residents stay indoors and keep windows closed.

No alerts have been issued from the South Coast Air Quality Management District.

Carson Mayor Albert Robles is furious with the AQMD, accusing it of withholding certain information regarding air quality.

"I'm frustrated with the AQMD failing to acknowledge that it's their responsibility to notify us," Robles said.