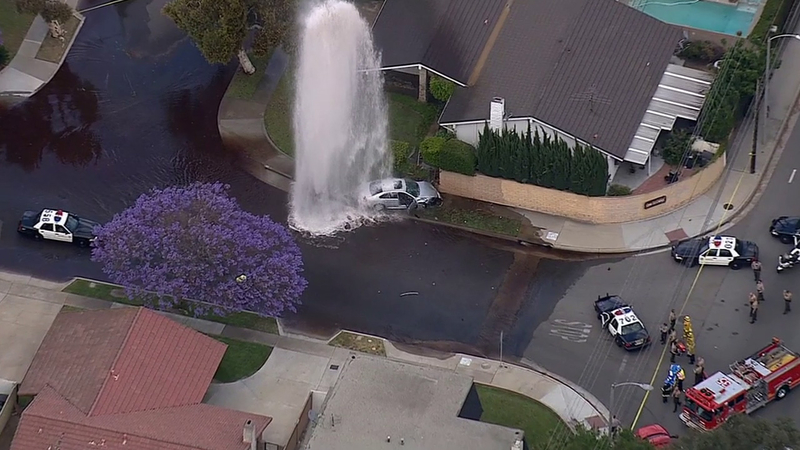 CERRITOS, Calif. (KABC) -- A sheriff's deputy shot and killed a suspect who allegedly attempted to run him over in Cerritos Thursday afternoon.

Lt. Eddie Hernandez of the Los Angeles County Sheriff's Department says the shooting occurred in the 17200 block of Pires Avenue shortly after 4:30 p.m.

Sheriff's deputies responded to a report of a suspicious woman allegedly knocking on doors near the 1300 block of Beach Street. The informant provided the sheriff's department with a description of the female and a license plate number of the vehicle she left in.

A responding deputy located a vehicle that matched the description in the 1300 block of Palm Place. The deputy saw a woman, matching the description the informant gave, standing outside the vehicle.

As the deputy approached the vehicle, he also saw a black male in the driver's seat. The deputy asked the man to show his hands, but he refused and reached in his front pockets and then started to rev the engine.

"The suspect then accelerated away from the curb without warning, striking the deputy. Fearing for his safety, the deputy fired at the suspect," Hernandez said.

The driver continued driving westbound on Palm Street to Pires Avenue, where he crashed into an electrical box, taking down a light pole and shearing a fire hydrant, which sent a geyser into the air and water gushing onto the streets.

"Once he collided with that fire hydrant, it actually exploded and a lot of water gushed out," Hernandez said.

The suspect was pronounced dead at the scene at about 5:40 p.m. The deputy was transported to a local hospital for minor injuries after being struck by the suspect's vehicle.

Investigators say it's possible that the couple was knocking on doors looking for homes to burglarize. The female was detained for questioning pending further investigation.

The investigation is being led by the Los Angeles County District Attorney's Office, the Sheriff's Homicide Bureau and the Internal Affairs Bureau, which is routine protocol following deputy-involved shootings.