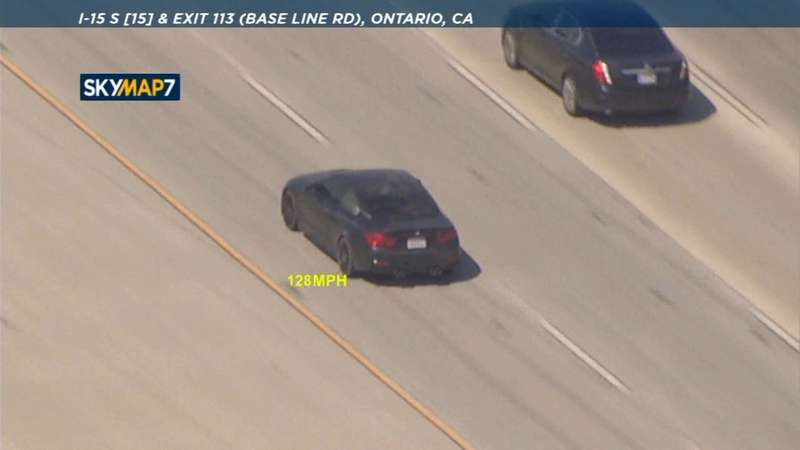 HESPERIA, Calif. (KABC) -- The driver of a stolen car who led authorities on a high-speed chase through L.A. and San Bernardino counties was arrested after he was found hiding in a residential area Wednesday.

According to LAPD, officers responded to a burglary in the 600 block of N. Sierra Bonita in the Fairfax area of Los Angeles at 7:38 a.m. A BMW had been stolen at the location, so officers put out a broadcast, which CHP picked up.

Los Angeles police and California Highway Patrol units located a dark-colored BMW, and a pursuit was initiated after the driver failed to yield.

The chase, which saw speeds of up to 140 mph, made its way on the 10 Freeway into the Ontario area, before transitioning onto the northbound 15 Freeway and heading toward the Cajon Pass. The suspect then exited the 15, got onto the 215 Freeway and transitioned onto the SB 15 near Glen Helen Regional Park. The vehicle then made its way onto the westbound 10 Freeway, and at one point clipped a semi-truck. Both vehicles kept moving after the impact.

The rear bumper was seen dangling off the back of the BMW as the driver continued to attempt to flee. The car exited the 10, and the chase continued on surface streets in the Upland area. The suspect then bailed out of the vehicle and fled on foot near 6th and F streets in La Verne.

The suspect was found hiding in a rear house in the area and was taken into custody without incident, police said.

A suspected car thief clipped the front edge of a big rig while fleeing police during a high-speed chase across SoCal freeways on Wednesday.