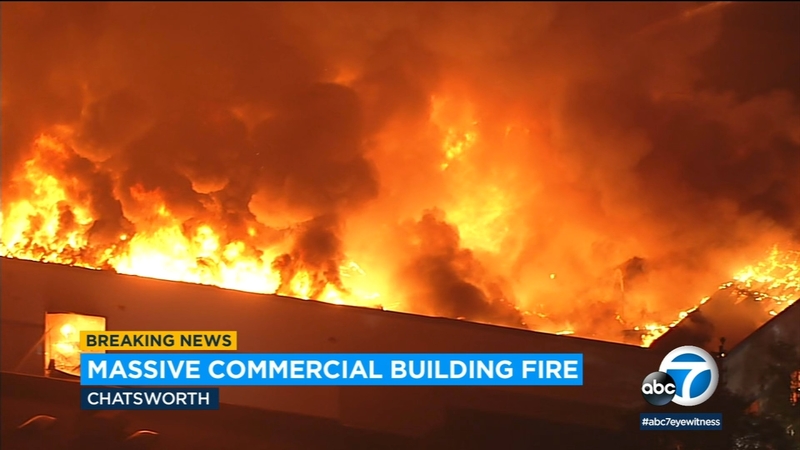 Crews initially responded shortly before 10 p.m. to the Arizona Pipeline Co., 20510 Sunburst St., near Oso Avenue and north of Nordhoff Street. They encountered heavy fire and smoke coming from the approximately 75-foot-by-100-foot building.

A large plume of smoke was visible from miles out and firefighters went into defensive mode to try and contain the flames. The building appeared to house a number of box trucks and explosions were heard inside the building while the fire raged.

The explosions were believed to be caused by tires popping, according to LAFD Cmdr. Chief Cory Rose.

The building's roof collapsed as the flames appeared to have completely destroyed the building. A total of 120 firefighters were assigned to the fire and kept the flames from spreading to nearby buildings, according to Margaret Stewart of the Los Angeles Fire Department.

By 11 p.m., most of the flames looked to be out, and firefighters continued getting the upper hand on the blaze. A knockdown was called shortly after.

One firefighter was taken to a hospital with a non-life-threatening burn injury, Stewart said.

It was not known how the fire began. Per department protocol for a fire of this size, arson investigators were called to the scene.