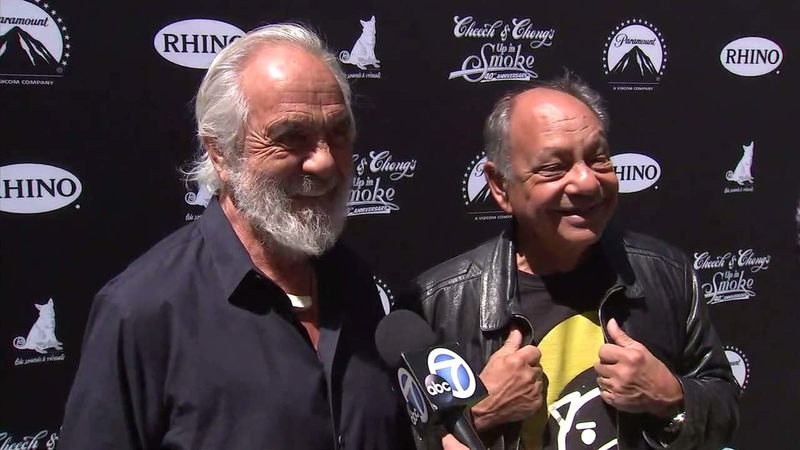 WEST HOLLYWOOD, Calif. (KABC) -- Monday was declared "Cheech and Chong Day" in West Hollywood, 40 years after the film, "Up in Smoke" hit theaters in 1978.

Not only were Cheech Marin and Tommy Chong honored with a day named after them, the comedians were given a key to the city by West Hollywood Mayor John Heilman and Mayor Pro Tempore John Duran. Comedian George Lopez emceed the ceremony.

The comedians thanked "Up in Smoke" director Lou Adler for believing in the duo's talent and standing by them.

"'Up in Smoke' wouldn't have done anything if it wasn't for Lou's ability to take a small project and make it bigger - big as life, is what it is," Chong said. "'Up in Smoke' would have been a local hit, maybe, but Lou had to put it in the right places, like in Cannes Film Festival, he got it over there somehow, and he introduced our crazy humor to the world through our records and through 'Up in Smoke.'"

Adler said the pair deserved the honor bestowed on them by the city.

"They should be on the Hollywood Walk of Fame. They should be in the Rock and Roll Hall of Fame," Adler said. "But all those things will come.

"They are Abbott and Costello, Laurel and Hardy. They're iconic," he added. "It was hard to imagine then that we would get the keys to anything except maybe jail."

The duo also poked some fun at the Trump administration.

Marin described the film as a "home-grown movie" all can enjoy, adding that the movie was mostly filmed at the iconic Roxy Theater, which he believes should become a cultural landmark for the city of West Hollywood.

When Heilman took the podium, he also thanked Adler and the Roxy.

This ought to be interesting. To celebrate the 40th anniversary of #UpInSmoke, @CheechMarin & @tommychong are getting the key to the city of West Hollywood. Happening soon. pic.twitter.com/Xj5tCKgELT

Duran said growing up in East Los Angeles, Cheech and Chong gave him a "sense of relief that there was going to be some humor out there." Duran gave Cheech and Chong credit for starting and continuing to support the legalization of marijuana.

The actors were then presented with a key to the city and met with loud applause from the audience.