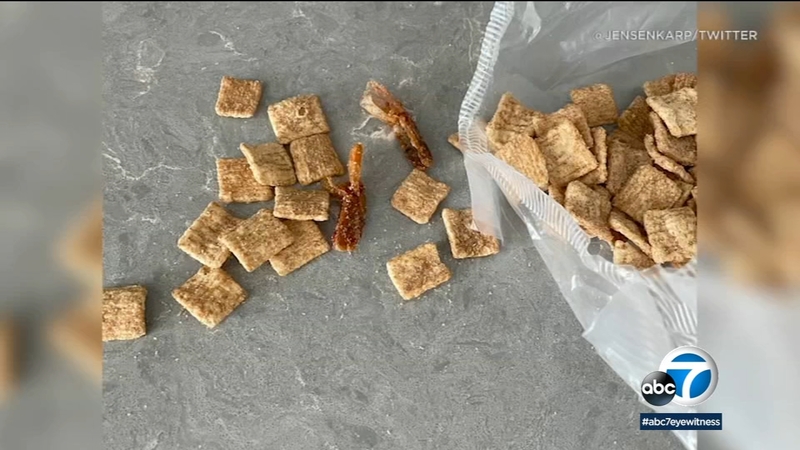 LOS ANGELES (KABC) -- A Los Angeles radio personality is going viral for a humorous series of tweets detailing how he found what appeared to be shrimp tails in a box of Cinnamon Toast Crunch cereal bought at a local Costco.

Jensen Karp tweeted a picture of a bag of cereal with what appeared to be two shrimp tails and the caption "Ummmm @CTCSquares - why were there shrimp tails in my cereal? (This is not a bit)."

Ummmm @CTCSquares - why are there shrimp tails in my cereal? (This is not a bit) pic.twitter.com/tTjiAdrnVp

That set off a hilarious series of responses from the public, including stories about their own encounters with items that didn't belong in food packaging, and an exchange with General Mills that didn't do the company any PR favors.

"Accumulation of sugar particles." I am truly at a loss for words. https://t.co/TtIyEYplNe

She searched the other bag in the family-sized pack of cereal that they had bought at the Woodland Hills Costco and they discovered something that looked like string or dental floss in another bag.

Karp also detailed his communications with General Mills that at one point included the company telling him the items that looked like two shrimp tails were actually sugar from the manufacturing process.

After further investigation with our team that closely examined the image, it appears to be an accumulation of the cinnamon sugar that sometimes can occur when ingredients aren't thoroughly blended. We assure you that there's no possibility of cross contamination with shrimp.

The company wrote: "After further investigation with our team that closely examined the image, it appears to be an accumulation of the cinnamon sugar that sometimes can occur when ingredients aren't thoroughly blended. We assure you that there's no possibility of cross contamination with shrimp."

Later the company asked him to send the box or contact local law enforcement as there may have been product tampering involved.

Ok, I have sent you a DM. Fair warning, I look different since eating your cereal today. https://t.co/s9tUn2EOD3 pic.twitter.com/6otUwUmrYo

Karp said he was going to have the items tested at a lab to confirm if they are indeed shrimp tails.

"We're going to a lab," he tweeted, showing the box of cereal seat-belted in the front seat of his car.

The Twitter thread has generated thousands of replies, comments and jokes, including shoutouts from Chance the Rapper and Seth Rogen, suggestions for recipes combining shrimp and the cereal, and countless memes about shrimp.

Karp has been a rapper, television writer, podcaster and art gallery owner. He is also well-known for a two-year stint on the "Kevin and Bean" morning show on Los Angeles station KROQ 106.7 FM.