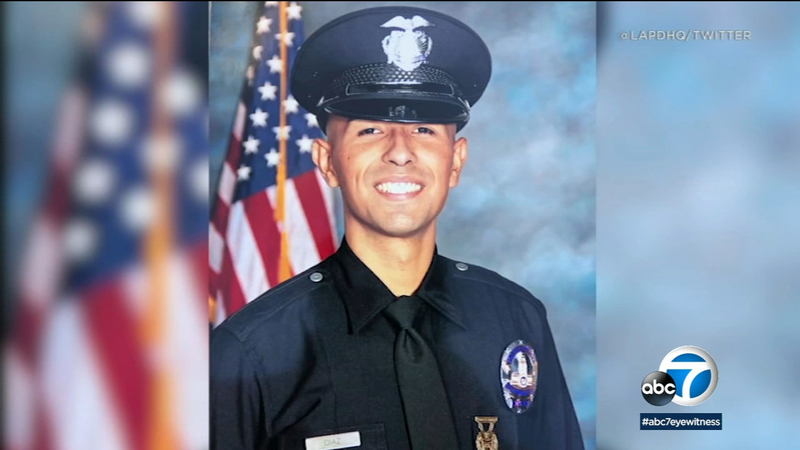 L.A. city flags were at half-staff to honor 24-year-old Juan Jose Diaz, the LAPD officer shot and killed early Saturday outside a taco stand in the area of Avenue 26 and Artesian Street.

Friends and the community paid their respects to his family.

Diaz, his girlfriend and her two brothers were eating at a taco stand when the off-duty officer saw several young men writing graffiti nearby and told them to stop, according to a police source who confirmed to Eyewitness News the details of the incident that were first reported by the Los Angeles Times. One of the taggers then brandished a handgun as they approached Diaz and made threats.

Investigators are still canvassing for video and looking for witnesses.

Dodgers flags and American flags lined another memorial where Diaz was killed.

"He always had a pep in his step-type of thing, very cool, very mellow," said Michael Zamora.

"I was actually trying to become an officer, and I would ask him for advice... He said it was awesome being part of the LAPD," Zamora said.

It was Diaz's lifelong dream to be a police officer. He'd only been an officer for two years.

The death hits close to home for Alicia Villal, who's lived in Lincoln Heights for 62 years and has relatives who've worked for the LAPD.

"It has its ups and downs. Yes, it's gang-infested... We need to do something to make this community safe again," Villal said.

She's praying for justice for the Diaz family.