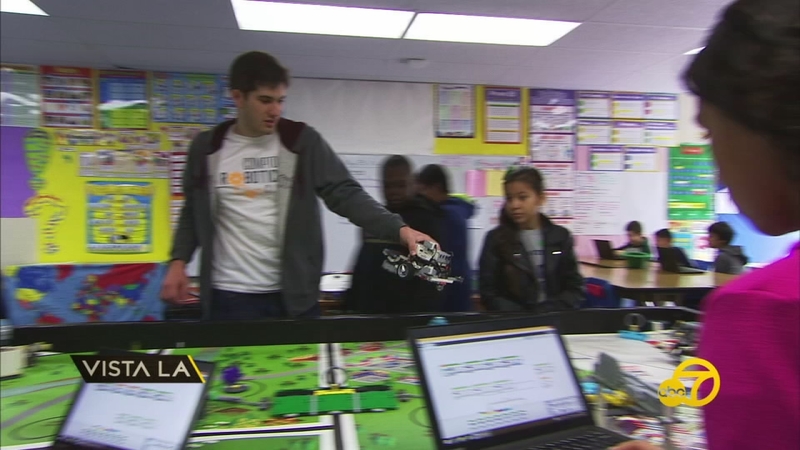 COMPTON, Calif. (KABC) -- "I realized I was really fortunate in a lot of things in my life. Every school I've been to I always had access to robotics. I decided, 'Hey what if I went to a place where kids probably don't have a robotics program and try to implement one there?'"

Eighteen-year-old Ben Indeglia is a senior at New Roads School in Santa Monica, a private school with a higher purpose.

Lutheren Williams, Head Master at New Roads School, says that the idea is simple, "If kids lived and learned together in a diverse community, they would be prepared to be bridge builders and leaders in the world."

With the mindset of a leader and with the support of his school, Ben moved forward with his ambitious idea of introducing robotics to kids in Compton. He started with recruiting his former middle school robotics teacher, Danny Figueroa.

"I didn't have any idea what was going to happen. I just knew that it was an idea worth pursuing and investing time into. I wanted anything that I could to help Ben pursue his vision," Danny said.

They started a GoFundMe account and raised about $30,000. Then, Compton School District's Superintendent Darin Brawley met with Ben and Danny, who only had enough funds to teach robotics at one school, but Mr. Brawley reassured them that they would find a way to make it possible for them to extend the program to eight middle school in Compton.

In three short years, the club has grown from eight to more than 20 middle schools! And hundreds of local students have been given this incredible opportunity to learn in a hands-on and innovative environment.

Ben believes, "The kids just needed exposure, they just needed to see the robots to succeed. So I'm showing them the door, but they're the amazing ones who are actually going through and doing all the amazing things."

"What I really like about it is that it's really challenging and exciting; how you program, how you do many other things," fifth-grader Lilian Ramirez said.

"I feel excited about this and happy. It's a light in my life," fourth grader Kimberly Bravo said.

Compton Robotics student Valeria Silva has a special message for girls, "It's fun and they could show the boys that it's not only for them, it's for everyone."

Every Saturday, Instructors Ben and Danny engage with the kids at different campuses. In addition, they've trained a group of teachers to run the robotics club independently. They want to create an army of students from this community that are going to go out and have careers in robotics and engineering so they'll be able to come back and pass this knowledge forward.

"It brings a smile to my face coming here and seeing the kids do some great things," Ben said.

Ben plans to attend the University of Chicago in 2018. We wish him the best of luck!