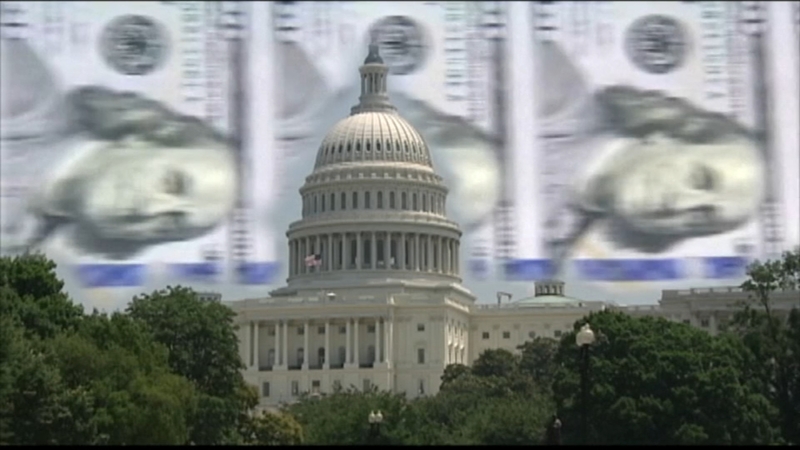 The milestone political victory provides $1,400 checks for most Americans and directs billions of dollars to schools, state and local governments and businesses.

Democrats said the American Rescue Plan would help the country defeat the virus and nurse the economy back to health. Republicans criticized the $1.9 trillion package as more expensive than necessary and they complain it inflates the national debt and sends money to projects not directly tied to the pandemic. The measure follows five earlier virus bills totaling about $4 trillion that Congress has enacted since last spring.
Click here to check out our stimulus check calculator to see how much you could be eligible for under this plan.

A look at some highlights of the legislation:

Expanded unemployment benefits from the federal government would be extended through Sept. 6 at $300 a week. That's on top of what beneficiaries are getting through their state unemployment insurance program. The first $10,200 of jobless benefits accrued in 2020 would be non-taxable for households with incomes under $150,000.

Additionally, the measure provides a 100% subsidy of COBRA health insurance premiums to ensure that laid-off workers can remain on their employer health plans at no cost through the end of September.

The size of the check would shrink for those making slightly more, with a hard cut-off at $80,000 for individuals and $160,000 for married couples.

Most Americans will be getting the full amount. The median household income was $68,703 in 2019, according to the U.S. Census Bureau. Biden said payments would start going out this month.

Money for state and local governments

The legislation would send $350 billion to state and local governments and tribal governments for costs incurred up until the end of 2024. The bill also requires that small states get at least the amount they received under virus legislation that Congress passed last March.

Many communities have taken hits to their tax base during the pandemic, but the impact varies from state to state and from town to town. Critics say the funding is not appropriately targeted and is far more than necessary with billions of dollars allocated last spring to states and communities still unspent.

The bill calls for about $130 billion in additional help to schools for students in kindergarten through 12th grade. The money would be used to reduce class sizes and modify classrooms to enhance social distancing, install ventilation systems and purchase personal protective equipment. The money could also be used to hire more nurses, counselors and janitors, and to provide summer school.

Spending for colleges and universities would be boosted by about $40 billion, with the money used to defray an institution's pandemic-related expenses and to provide emergency aid to students to cover expenses such as food and housing and computer equipment.

A new program for restaurants and bars hurt by the pandemic would receive $28.6 billion. The grants provide up to $10 million per company with a limit of $5 million per physical location. The grants can be used to cover payroll, rent, utilities and other operational expenses.

The bill also provides $7.25 billion for the Paycheck Protection Program, a tiny fraction of what was allocated in previous legislation. The bill also allows more nonprofits to apply for loans that are designed to help borrowers meet their payroll and operating costs and can potentially be forgiven.

President Joe Biden called the Senate vote "one more giant step" toward delivering on his promises to help Americans.

The bill provides about $50 billion to expand testing for COVID-19 and to enhance contract tracing capabilities with new investments to expand laboratory capacity and set up mobile testing units. It also contains more than $15 billion to speed up the distribution and administration of COVID-19 vaccines across the country. Another $1 billion would go to boost vaccine confidence. And $10 billion would be used to boost the supply of medical devices and equipment to combat the virus under the Defense Production Act.

Parts of the legislation advance longstanding Democratic priorities like increasing coverage under the Obama-era Affordable Care Act. Financial assistance for ACA premiums would become considerably more generous and a greater number of solid middle-class households would qualify. Though the sweetened subsidies last only through the end of 2022, they will lower the cost of coverage and are expected to boost the number of people enrolled.

The measure also dangles more money in front of a dozen states, mainly in the South, that have not yet taken up the Medicaid expansion that is available under the ACA to cover more low-income adults. Whether such a sweetener would be enough to start wearing down longstanding Republican opposition to Medicaid expansion is uncertain.

The bill would also provide abut $3 billion for states to help address mental health and substance use disorders, which have been exacerbated by the pandemic. More than $14 billion is directed toward increased support for the Department of Veterans Affairs.

Bigger tax breaks for households with and without kids

Under current law, most taxpayers can reduce their federal income tax bill by up to $2,000 per child. In a significant change, the bill would increase the tax break to $3,000 for every child age 6 to 17 and $3,600 for every child under the age of 6.

The legislation also calls for the payments to be delivered monthly instead of in a lump sum. If the secretary of the treasury determines that isn't feasible, then the payments are to be made as frequently as possible.

Families would get the full credit regardless of how little they make in a year, leading to criticism that the changes would serve as a disincentive to work. Add in the $1,400 checks and other items in the proposal, and the legislation would reduce the number of children living in poverty by more than half, according to the Center on Poverty and Social Policy at Columbia University.

The bill also significantly expands the Earned Income Tax Credit for 2021 by making it available to people without children. The credit for low and moderate-income adults would be worth $543 to $1,502, depending on income and filing status.
EMBED More News Videos

Under current law, most taxpayers can reduce their federal income tax bill by up to $2,000 per child. In a significant change, the bill would increase the tax break to $3,000 for every child age 6 to 17 and $3,600 for every child under the age of 6.