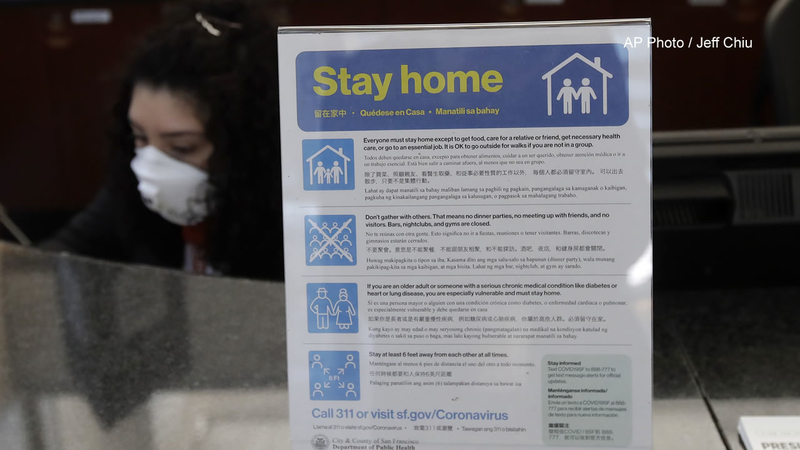 SAN FRANCISCO -- The latest numbers from the CDC show that California has the second-highest COVID-19 infection rate in the country.

Only Tennessee has more cases per 100,000 people. As of Sunday afternoon, California is at 95.7 people infected per 100,000 and Tennessee is at 119.7, data shows. Bay Area medical experts are begging for people to use caution.

Doctors say there are two likely reasons for the high numbers: Coronavirus fatigue and private gatherings.

Gov. Gavin Newsom's regional stay-at-home order for Southern California is set to expire Monday, but with regional intensive care unit capacity officially considered to be zero, he has said the order will almost assuredly be extended.

State officials are expected to extend the strictest stay-at-home orders in central and Southern California as hospitals there are quickly running out of intensive care unit beds for COVID-19 patients.

"We have, basically, a pandemic fatigue that has set it where people maybe aren't wearing masks when they should be. They're beginning to try to go out and see friends or have friends over. And I think we have really amplifying events that have occurred with the back-to-back holiday seasons," said Dr. Robert Kim-Farley, a professor at UCLA's Jonathan and Karin Fielding School of Public Health.

To exit from the stay-at-home order, a region has to move back to at least 15% ICU capacity. After hitting that mark, projections must predict the region will stay at that level for at least another four weeks before the order can be lifted.

"We are very aware that there is pandemic fatigue, that people are tired, and I think that the ability for people to shelter and their willingness is definitely not the same as it was in the spring," says Dr. Ahmad Kamal of Santa Clara County in Northern California. Dr. Kamal is the director of healthcare preparedness in the county. He says we need to be strong by not traveling and not gathering.

Those who are gathering, however, say they are being safe.

"It's just the five of us, we're not getting together with any other family members," says Adrianne Mendoza who was with her family.

California's remaining ICU capacity is alarmingly low, just 2.1% as of Friday. Here's what happens next.

Most also admitted to us that they have been traveling.

And many admitted that they've had gatherings, but kept them small.

"We only gathered with a group of no more than 10 people. It's all our family which was close by," said Karla Rivas.

"If you cannot go outside you have to go to visit some people and do something," says Koshman.

Dr. Kamal says that on any given day there are less than 30 ICU beds available in all of Santa Clara County. He says even family gatherings are dangerous but believes that by staying home we can reverse the high number of cases which would improve ICU numbers, take the pressure off hospitals, and lead to reopenings.

"We've seen so many times when people get together with small groups even with their cousins, uncles, aunts, or grandparents that it does happen and many times it happens with people who don't know they're sick and don't know they have symptoms so we really all need to hunker down and shelter," says Dr. Kamal.