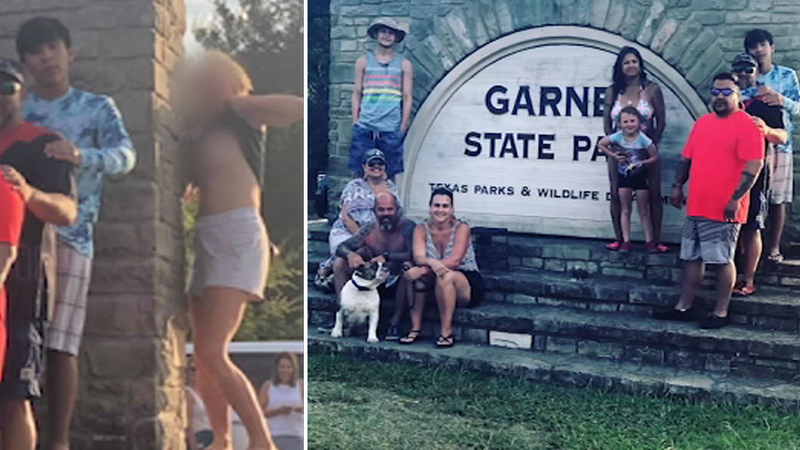 CYPRESS, Texas -- What was supposed to be a family memory to be cherished forever has now been tainted, a Cypress, Texas, mother says.

"(You see her) boob, nipple, everything," Monica Davila said.

It was quite the photobomb shell shocker for her.

"We're trying to recreate memories," Davila said. "Having some chick's boob isn't allowing us to do that."

As she was going through her vacation pictures from Garner State Park Monday morning, she noticed a smiling woman who had lifted her shirt to expose her breast.

Davila said just recently her husband's grandmother passed away, so the family planned a trip together in her honor, and to see that type of photobomb ruined what was supposed to be a fun friendly family gathering.
"I just feel completely disrespected," she said. "I just think this person should be held accountable. What she did was wrong. There were kids there watching her."

In fact, in the photo, you can see what looks like a young person staring right at her.

"Me personally, I think this is a big deal," she said.

Davila said she called Uvalde police to file a report and also decided to share it on Facebook.

"Let's make this go viral so that she can be embarrassed," she said.
Hundreds of people, so far, have left comments on her Facebook post.

"I've had criticism on both sides, people are like, 'Who cares, it's just a boob,' but I care," Davila said.