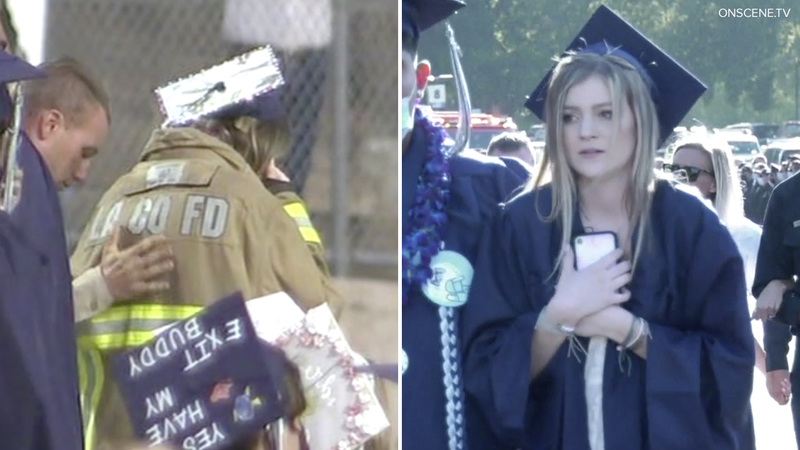 SANTA CLARITA, Calif. (KABC) -- The daughter of the firefighter who was killed at the Agua Dulce station graduated from high school Thursday, wearing her father's firefighting jacket as she tearfully received her diploma.

Several hundred firefighters in black uniforms lined the entrance to College of the Canyons as Joslyn Carlon and her family entered the ceremony.

When the announcer read her name, the assembled students from Saugus High School applauded loudly as Joslyn walked on stage and accepted her diploma.

She wore her father's firefighting jacket over her robe. As she walked off stage, she was accompanied by a sheriff's deputy who is a friend of the Carlon family.

"To honor that beautiful girl tonight meant so much to me, to all my colleagues and my friends," said L.A. County firefighter-paramedic Gary Reichman.

Sources told Eyewitness News that the suspect was a firefighter who shot and killed another as part of an ongoing dispute.

Tory Carlon, a 44-year-old firefighter who had worked for the department for 20 years, was shot and killed at the Agua Dulce station on Tuesday. He was married with three daughters.

The shooter was a fellow firefighter, identified as Jonathan Patrick Tatone, 45, who then drove to his own home in Acton, set it on fire and took his own life. The two had been involved in an ongoing work-related dispute that has not been specified.

A 54-year-old fire captain was also wounded in the shooting and is recovering after surgery.

A Los Angeles County firefighter who authorities said was was fatally shot by an off-duty co-worker is being remembered by people who held him in high regard.