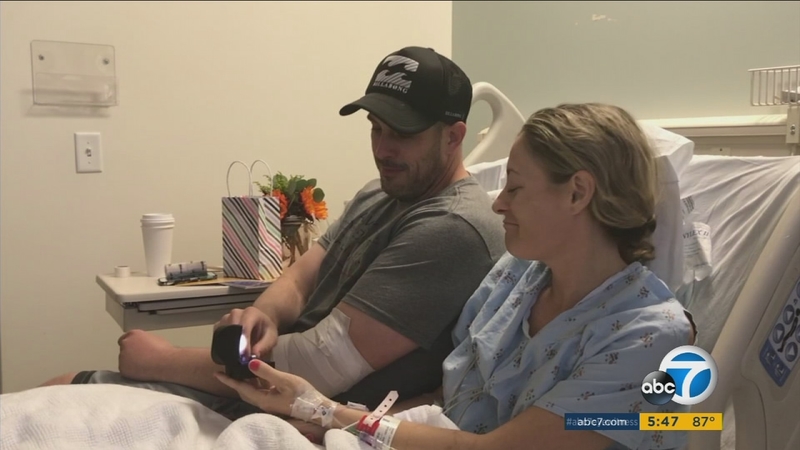 IRVINE, Calif. (KABC) -- Derek and Lauren Harp spent their third wedding anniversary at UC Irvine Medical Center after the couple was struck by gunfire at the Route 91 Harvest Festival in Las Vegas.

Derek Harp, an Anaheim man who serves in the National Guard, won't tell you about his heroic acts, but he will tell you how much he loves his wife.

"She's wonderful. She's been my rock, and she's just the most gracious, caring person I've ever met," he said.

After the Las Vegas mass shooting that left hundreds injured and dozens dead on Sunday, Harp lost a possession that's particularly important to him: his wedding band.

"He shared with me that he had lost his wedding ring at the hospital somehow, and it was really...you could tell it was really hurting him," said Harp's cousin, Kevin Domene.


"I decided to reach out to Robbins Brothers," said Domene's girlfriend, Mary Graffice.

Within hours, the jeweler delivered the same wedding band Harp lost, but they had Lauren Harp do the honors in her hospital room.

Derek Harp, who fought back tears, said it's important because of what the ring symbolizes.

"It's our love, and even when I'm not home, this is still with me. It reminds me of that and it reminds me of...just everything she does for me and everything I do for her, you know, and it's just a representation of that day that I remember," shared Harp.

MORE: Disneyland employee in grave condition after being shot in liver during Vegas shooting