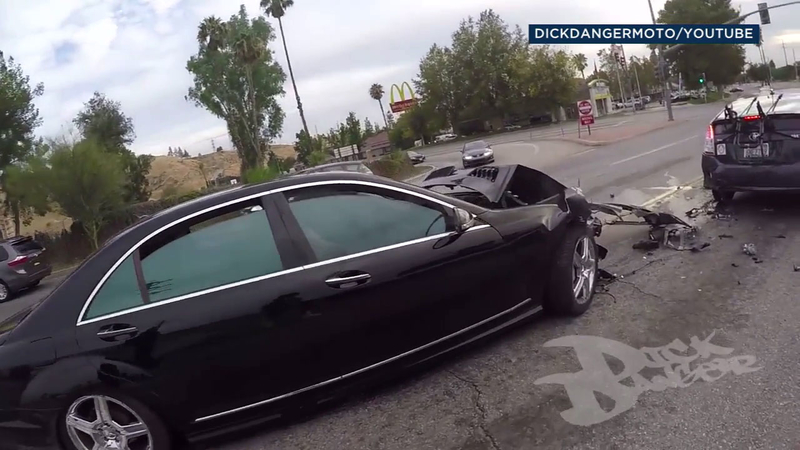 COLTON, Calif. (KABC) -- A motorcyclist who saw a Mercedes weave and smash into several cars in Colton then flee the scene followed the driver on a chase through the Inland Empire, helping police track him down.

His effort helped police find the hit-and-run driver who was later arrested on suspicion of DUI.

The motorcyclist, who goes on You Tube by the name Dick Danger, recorded the crashes and the chase on video.

The video shows a black Mercedes sedan moving fast on a surface street on the wrong side of the yellow line, sideswiping a car heading in the other direction that just managed to swerve on time.

It then clips the back of a pickup truck and smashes into a Toyota Prius stopped at a light, crumpling the front section of the Mercedes and leaving debris on the roadway.

The driver of one of the struck cars then confronts the man, who drives off from the scene despite the smashed-in front end.

Dick Danger promptly runs back to his motorcycle and gives chase, staying on the phone with 911 to give location information to officers.

He followed him onto the 215 Freeway and then exited Barton Road.

The Mercedes driver briefly stopped at a veterinarian clinic, then got back on the freeway.

At one point, part of his bumper fell off onto the road.

Eventually the driver stopped on the side of a road in Moreno Valley and got out of the vehicle.

"I'm saying I was wrong man. What else you want me to say?" the driver says to Dick Danger.

"I wanted you to stop, you hit two cars, bro," Danger replied.

Eventually a CHP officer arrived and detained him for Colton police.

The Mercedes driver was later identified as Nathanial Sylvester, 62. He was arrested for suspicion of DUI.

In most cases when you witness a crime, police say be a good witness and call 911, but they don't recommend getting involved.

Dick Danger told Eyewitness News he had to help.

"I felt like I did the right thing, I really did."

"I really didn't want to chase the guy, I didn't want to get involved. But as soon as he took off on that freeway after hitting multiple cars I knew I had to do the right thing and chase him down before he hurt or killed anybody else."

A motorcyclist who saw a sedan weave and smash into several cars in Colton then flee the scene followed the driver on a chase through the Inland Empire, helping police track down the alleged drunk driver.