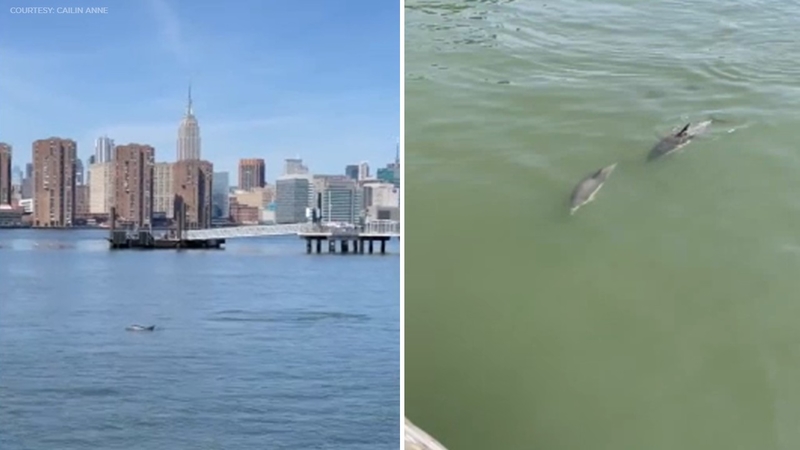 NEW YORK CITY -- New Yorkers were treated to a surprise visit from two friendly dolphins in the East River.

The dolphins were spotted near WNYC Transmitter Park in Brooklyn around noon on Tuesday.

Cailin Anne posted video of the dolphins to Twitter with the caption, "Dolphins, in the East River. What."

"We see these animals during our offshore surveys in the wider New York Bight-so this is not normally where they are seen," Rosenbaum said. "In the New York Harbor and surrounding estuary, we actually have detected two other species--bottlenose dolphins and harbor porpoise-- from a two acoustic monitoring study we recently completed."

Rosenbaum said it does not appear that the dolphins were in distress.

A young woman from Nassau County thought it would make a cool TikTok video - jumping off a boat for a swim in the Hudson River, in front of the Statue of Liberty.

"Hopefully this is a group of animals that has been able to freely swim into this area and will freely swim out of the area and are not in distress," Rosenbaum said. "However, we don't know if there are other members of their pod that are in there as well-we just know what this person was fortunate enough to see (and capture/share some nice video)."

Rosenbaum said it is difficult to assess if the dolphins are in any danger in the East River. He said some immediate risks could be related to swimming into areas in the harbor and East River where it could make it more difficult for them to exist.

"Hopefully, that won't occur," he said.

While it's rare to see ocean creatures in the waters off NYC, it is not unheard of.

It was just a few months ago that a humpback whale was spotted spouting off in the Hudson River. In that instance, the Parks Department said it may have been because of the improvement in local water quality and an abundance of food sources like Atlantic menhaden.

There were also reports of dolphins swimming near the famed St. Mark's Square in Venice, Italy, on Tuesday. Experts say coronavirus restrictions have brought fewer boat traffic and cleaner waters to the canals and waterways.

Dolphins were spotted in a Venice canal close to St. Mark's Square, as coastguard members and wildlife specialists searched for the animals.