The woman told investigators she was being aggressively followed by a driver before getting to a stop sign.
KABC
By John Gregory 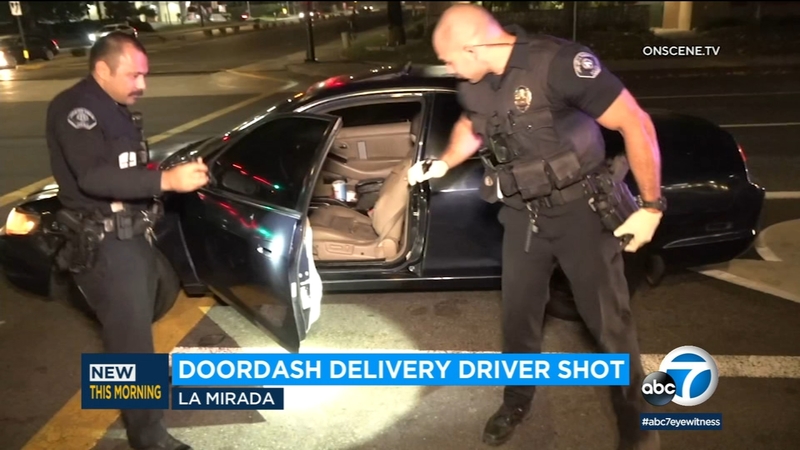 LA MIRADA, Calif. (KABC) -- A woman who says she was working for DoorDash as a delivery driver was shot in La Mirada Tuesday night.

Investigators say she was shot at twice while she was in her car. One of the shots went through the door and struck her. The woman was able to take herself to the hospital where she called 911. Her condition is unknown and it's unclear if she remains hospitalized.

The woman, who has not been identified, told investigators she was being aggressively followed by a driver before getting to a stop sign.

It's also unclear if she was making a delivery at the time of the shooting. According to witnesses, the shooting happened in an "extremely quiet" neighborhood.

According to an update issued Wednesday morning, the sheriff's department said it's investigating a similar incident that occurred just hours before in Whittier, though details of that case weren't immediately released.

Investigators say both incidents involved a silver sedan, but they have no information on a suspect or suspects.

Meanwhile, a DoorDash spokeswoman issued the following the statement regarding the shooting.

"Safety is extremely important to us, and we're deeply concerned by this report of violence. We're actively reaching out to the Dasher involved to offer our support, and are engaging law enforcement to assist in their investigation in any way we can."

On Wednesday, the company announced it's partnering with security company ADT on adding new security features to its app, which will be available to all U.S. DoorDash drivers by the end of this year.

Under the new system, DoorDash drivers who are feeling unsafe can connect to an ADT agent using a button in DoorDash's app. The agent will stay on the phone until the driver feels comfortable; if the driver stops communicating, ADT will call 911.

DoorDash is also adding an emergency-assistance button to its app, which drivers can swipe to let ADT know they need immediate help. ADT will contact 911 and then remain in touch with the driver via text messages.