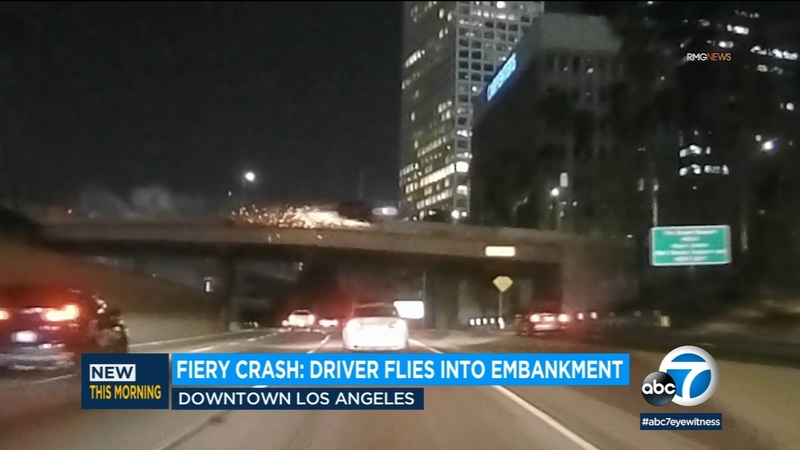 DOWNTOWN LOS ANGELES (KABC) -- A horrifying crash was caught on camera as a vehicle flew off a downtown Los Angeles overpass and crashed into trees alongside the 110 Freeway, and the quick actions of several good Samaritans may have helped save the driver's life.

The crash was reported about 10:50 p.m. Thursday near the Sixth Street exit where the driver was trapped inside the vehicle, according to the California Highway Patrol.

Video from the scene showed the vehicle fly off the Sixth Street overpass and into palm trees, then burst into flames as CHP officers rushed in to try to pull the driver from the burning, wrecked vehicle.

In the footage, officers can be heard shouting: "He's in there! We got to get him out!"

Firefighters arrived on scene and quickly freed the man and rushed him to a hospital in critical condition with burns and undisclosed injuries, according to Margaret Stewart of the Los Angeles Fire Department.

Multiple witnesses, including Fernando Salazar, rushed to the driver's aide.

"I ran out to see if he was awake, see if I could pull him out. But he looked like he was trapped in there, so I couldn't do much. So I called 911 right away to see if they could send somebody to help out," Salazar said.

The CHP says the driver was taken to an area hospital in critical condition.

Details of what led up to the crash were not immediately available.