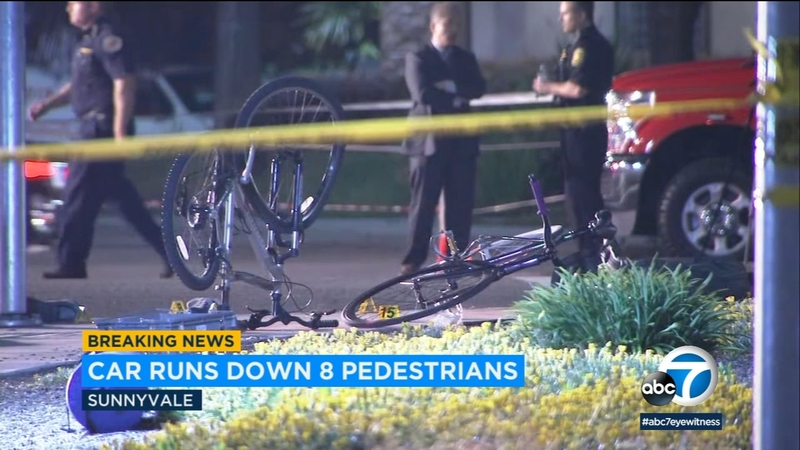 SUNNYVALE, Calif. -- A car plowed into a group of pedestrians in Sunnyvale, California Tuesday night, and police say the crash may have been intentional.

The crash happened at El Camino Real and Sunnyvale Saratoga Road. Eight victims were taken to the hospital, some with serious injuries. The driver was arrested.

The Sunnyvale Department of Public Safety said the group was possibly targeted by the driver, a man who they believe purposely turned into the group while driving full speed.

"Looks like it might have been an intentional act," Capt. Jim Choi with Sunnyvale DPS said. "All of that is under investigation at this time. The driver is in custody."

The youngest victim is a 13-year-old girl, the rest are believed to be adults. DPS said some victims suffered serious injuries.

Witnesses said the driver made no effort to stop.

"We do have witness statements that show that vehicle did not attempt to slow down or brake," Choi added. "And the scene itself doesn't show any evidence of braking."

The crime scene extends about a half a block down El Camino Real. Those who live in the area said it's a busy intersection surrounded by homes and businesses.

Shanelle Fioretti told KGO-TV, "People are just walking to get to these restaurants and food places and grocery stores, rather than getting in their car and driving there."

It's unclear whether the driver knew any of the victims. Investigators are looking into a possible motive, and whether alcohol or drugs played a role.

"It's very unusual. The city of Sunnyvale is a very safe city," Choi added. "So, to hear about a tragedy like this, it's just unheard of."
Report a correction or typo
Related topics:
northern californiapedestrian struckpedestrian injuredcalifornia
Copyright © 2021 KGO-TV. All Rights Reserved.
TOP STORIES
Newsom assaulted by 'aggressive' man on CA street
CA launches electronic vaccine verification
FACEism: How racist history of swimming continues to leave ugly mark
Couple accused in killing of Aiden Leos plead not guilty
Here's what will be closed or open for Juneteenth
New online vaccine record not working? Here's how to fix it
Poorer communities have fewer trees to offer shade, combat climate change
Show More
Kids dive for cover in brazen NY shooting caught on video
US Catholic bishops OK steps toward possible rebuke of Biden
Red Cross facing severe shortage of donated blood
Robocall-like tech used to get to front of EDD line
IE hospital reflects on its darkest days while looking ahead to herd immunity
More TOP STORIES News