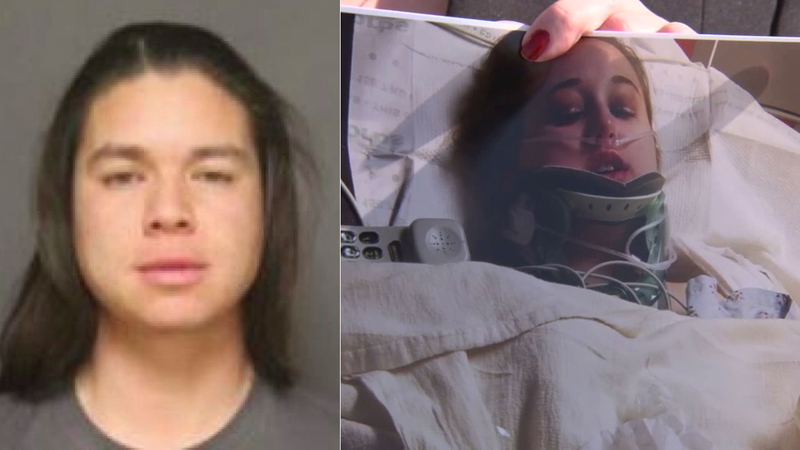 FULLERTON, Calif. (KABC) -- In a rare move, an Orange County judge vacated the sentence of a suspected drunk driver who hit and seriously injured a Cal State Fullerton student.

In October, Jorge Perez was sentenced to two years in prison after pleading guilty to driving under the influence, running a red light, hitting 20-year-old Jessica Weber and leaving the scene.

Weber says she suffered broken bones in her left arm, hip, back and pelvis.

Her mother spoke before the court, fighting for the judge to change the sentence.

"The DA failed us," said Bonnie Masters-Weber. "It refused to acknowledge their violation of our constitutional rights."

Masters-Weber was angry because neither she nor her daughter were informed about the sentencing. She lives in Sacramento and says she told the Orange County District Attorney's office she wanted to be present and to speak at the sentencing, a right guaranteed by the state's victims' bill of rights or Marsy's Law.

"I am making the determination that it is proper in the interest of justice to vacate the guilty plea that was entered in this case," said Judge Scott Steiner.

The judge ruled the family's rights were violated and the plea was invalid.

He granted the prosecution's motion for reconsideration, withdrawing the guilty plea and effectively, the sentence.

Perez's defense disagreed and said letters of impact from the family were considered.

"Described the injuries, and with that information the two-year sentence was still given," said Benjamin Arsenian, the defense attorney.

After the judge announced his decision, members of Weber's family gave emotional victim impact statements, including Weber herself. "Thirty-one-years old," she said before the court. "And he just mowed through me and didn't have the thought to stop?"

She told the court her friends, more than a decade younger than the driver, risked their own safety to stop traffic and get her medical care. She said she thinks about the crash every day and is upset Perez is not taking his actions more seriously.

Steiner told the defense his "indicated sentence," if they take an offer from the court, would now be four years, four months in state prison, the initial offer before the plea deal.

With the vacated sentence, Perez's plea goes back to "not guilty."

Susan Schroeder, the OCDA's chief of staff sent this statement:

"The Orange County District Attorney's Office (OCDA) is a leading enforcer of Marsy's Law rights and takes its advocacy for crime victims seriously. In the case of People V. Jorge Perez, the OCDA was vigorously pursuing a sentence of 4 years and 4 months on charges of driving under the influence of alcohol causing bodily injury, driving with blood alcohol .08% or more causing bodily injury, hit and run with injury, driving on a suspended/revoked license, and a sentencing enhancement for inflicting great bodily injury."

"Early on in the case, the victim's mother, Ms. Masters, had been working with a deputy district attorney, who is no longer with the office, who suggested she not make the long drive from northern California for each and every proceeding and that our office would notify her prior to the sentencing. A note was made in the file to contact her when the time came. The judge offered the defendant a two-year sentence, an offer that was not supported by the OCDA. The OCDA gave Ms. Masters' prepared victim impact statement to the judge who considered it at the sentencing hearing on October 17, but inadvertently failed to notify Ms. Masters to be present."

"Once the error was discovered and prior to being contacted by the media, the OCDA initiated the process of getting the case put back on the calendar to remedy the situation so Ms. Masters may address the court personally. OCDA prosecutors strive for perfection and in this case, we fell short. We certainly understand why Ms. Masters is upset and we are working to correct our error."

Masters-Weber left the court with an emotional plea: "Please don't let the system mow her down the way he mowed her down in the intersection."