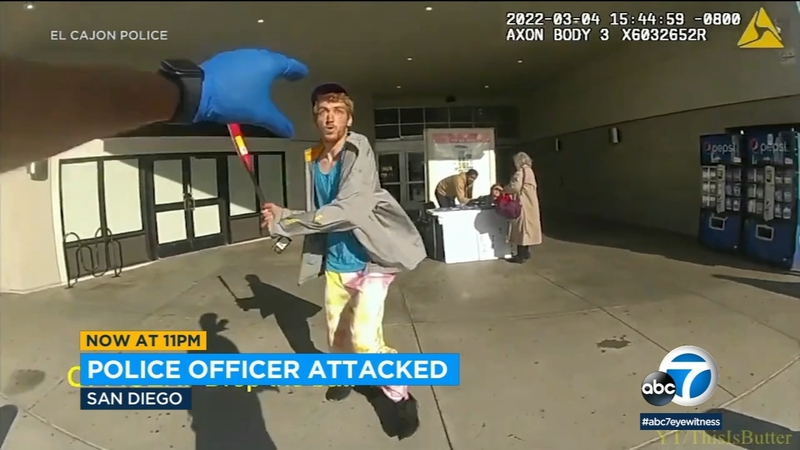 EL CAJON, Calif. (CNS) -- A man who allegedly tried to kill an El Cajon police officer last week by attacking him with a baseball bat is behind bars, police said Tuesday.

Julian Kurko, 26, is accused of trying to strike an unidentified officer in the head with a bat on Friday, March 4. He's being held without bail on suspicion of attempted murder and robbery, county jail records show.

According to Lt. Randy Soulard, the officer contacted Kurko on Fletcher Parkway following reports that a man was "committing a theft and threatening citizens.''

Soulard said that after Kurko swung the bat, the officer was able to restrain him until backup arrived. During that time, Kurko allegedly "continued to threaten to kill him.''

Cars were brought to a standstill on a Southern California freeway after fists fly between two drivers, and it's all caught on cell phone video.

Body-worn camera footage of the incident shows the officer approaching a man, allegedly Kurko, at Parkway Plaza and asking him to drop the bat before the bat-wielding man swings at the officer.

After he's restrained, the man in the video can be heard saying, "I'll (expletive) kill you, (expletive)'' and "I want to kill you, bro.''

El Cajon police say Kurko "has an extensive history of violent crimes'' that includes assault with a deadly weapon, brandishing a deadly weapon and making criminal threats, with several of the incidents involving law enforcement officers.

Kurko was slated to be arraigned Tuesday afternoon, but was not produced in court due to being in medical isolation, according to a spokesman with the San Diego County District Attorney's Office.