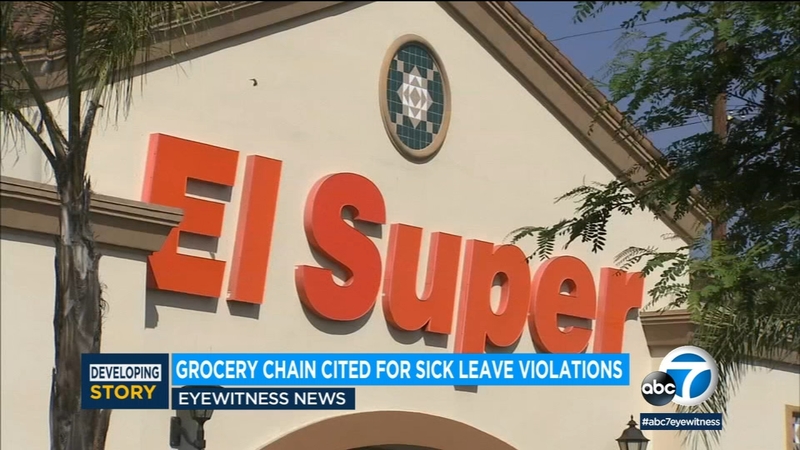 The chain is facing the citation that stems from allegations of failing to pay or delaying supplemental paid sick leave to workers affected by COVID-19 at 38 stores, including 21 stores in Los Angeles, four in Riverside County and one in Anaheim.

Bodega Latina, which does business as El Super, was cited $1,164,500 after an investigation found that "some workers were forced to work while sick, others were told to apply for unemployment while quarantining or in isolation, while others waited months to be paid," according to the Labor Commissioner's Office.

A spokesman for El Super says the claims are false and not supported by evidence.

"We are and have always been committed to complying with labor laws," El Super spokesman Eric W. Rose said in a statement. "In this digital age -- when anybody can say anything, however untrue -- trust and track record remain paramount. Our reputation and relationships with our valued employees are over two decades in the making, which is why our employees put their faith in us.

"The citations which do not even explain the allegations are without merit, baseless and irresponsible."

According to the Labor Commissioner's Office, some sick workers were told that until they received their test results, they had to come into work even when they displayed COVID-19 symptoms.

Those who needed to self-quarantine were told to apply for unemployment or disability to cover their isolation time, while others were denied time off to isolate when members of their household tested positive for COVID-19, according to the agency.

The state Labor Commissioner's Office has cited three El Super grocery stores in Southern California for failing to provide or delaying supplemental paid sick leave or other benefits to nearly 100 workers impacted by COVID-19, it was announced Tuesday.

According to the Labor Commissioner's Office, the investigation began in September 2020 following complaints from workers and a referral from the United Food and Commercial Workers International Union, which represents grocery store workers. The agency says workers were not consistently informed of their rights to supplemental paid sick leave if affected by COVID-19.

California's Supplemental Paid Sick Leave law, which expired Sept. 30, required that California workers at businesses with more than 25 workers be provided up to two weeks of supplemental paid sick leave if they are affected by COVID-19. The Labor Commissioner's Office says it continues to enforce the law for any violations that occurred between Jan. 1, 2021, and Sept. 30, 2021, the period the law covered.

Garcia-Brower said, "Supplemental paid sick leave is a tool to protect our communities by stopping the spread of COVID-19 through the workplace."

Meanwhile, Rose, the El Super spokesman, said, "The Labor Commissioner ignores that we have paid over $1.6 million in COVID-19 leave to our valued employees. The citations and the Labor Commissioners' press release are rich in heated invective and are not supported by the evidence, facts or the law."