NEW YORK -- Nobel laureate Elie Wiesel, the Romanian-born Holocaust survivor whose classic "Night" became a landmark testament to the Nazis' crimes and launched Wiesel's long career as one of the world's foremost witnesses and humanitarians, has died at age 87.

His death was announced Saturday by Israel's Yad Vashem Holocaust Memorial. No other details were immediately available.

The short, sad-eyed Wiesel, his face an ongoing reminder of one man's endurance of a shattering past, summed up his mission in 1986 when accepting the Nobel Peace Prize: "Whenever and wherever human beings endure suffering and humiliation, take sides. Neutrality helps the oppressor, never the victim. Silence encourages the tormentor, never the tormented."

For more than a half-century, he voiced his passionate beliefs to world leaders, celebrities and general audiences in the name of victims of violence and oppression. He wrote more than 40 books, but his most influential by far was "Night," a classic ranked with Anne Frank's diary as standard reading about the Holocaust.

"Night" was his first book, and its journey to publication crossed both time and language. It began in the mid-1950s as an 800-page story in Yiddish, was trimmed to under 300 pages for an edition released in Argentina, cut again to under 200 pages for the French market and finally published in the United States, in 1960, at just over 100 pages.

"'Night' is the most devastating account of the Holocaust that I have ever read," wrote Ruth Franklin, a literary critic and author of "A Thousand Darknesses," a study of Holocaust literature that was published in 2010.

"There are no epiphanies in 'Night. There is no extraneous detail, no analysis, no speculation. There is only a story: Eliezer's account of what happened, spoken in his voice."

MORE: Photos of Elie Wiesel through the years 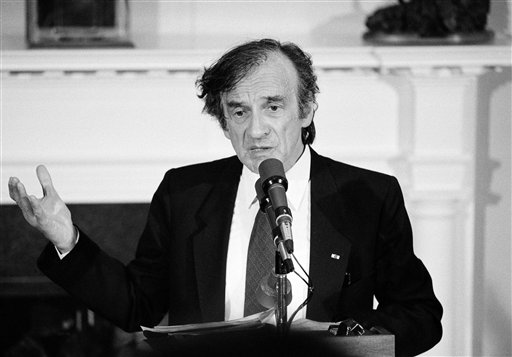 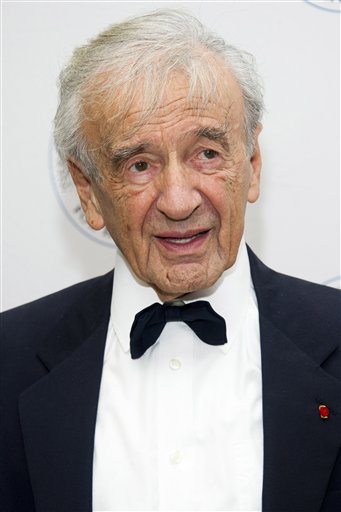 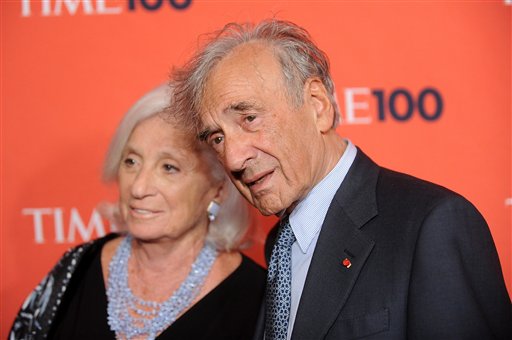 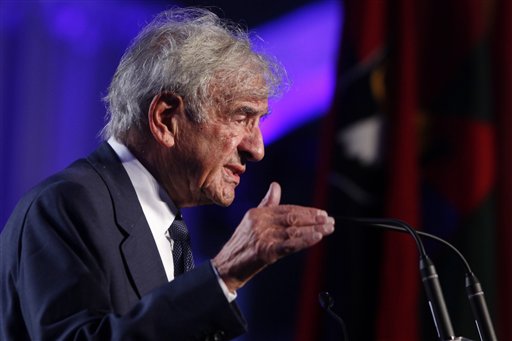 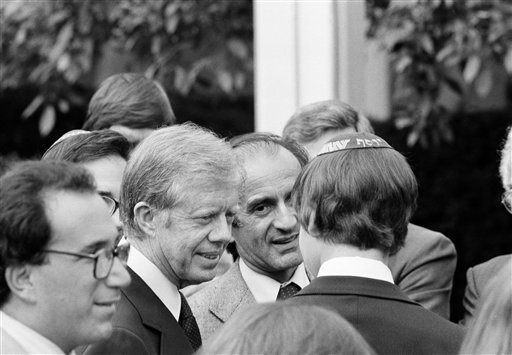 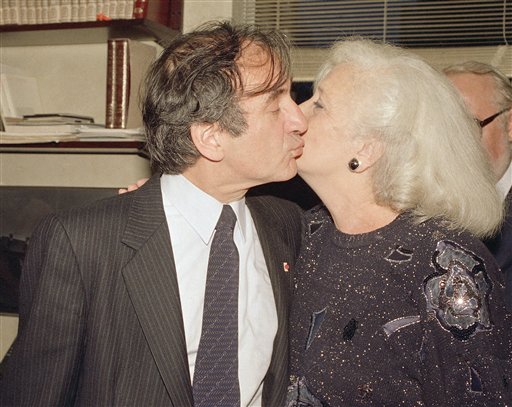 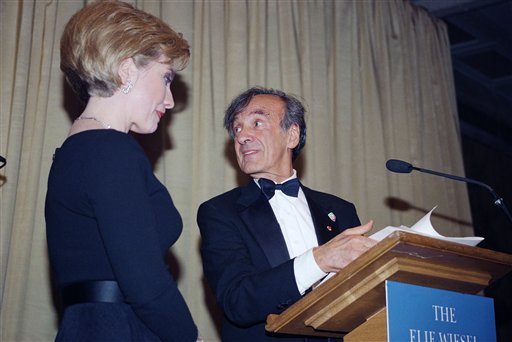 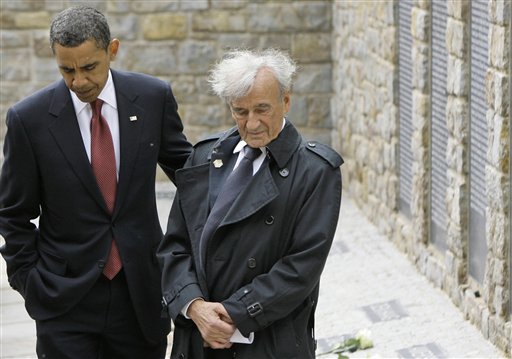 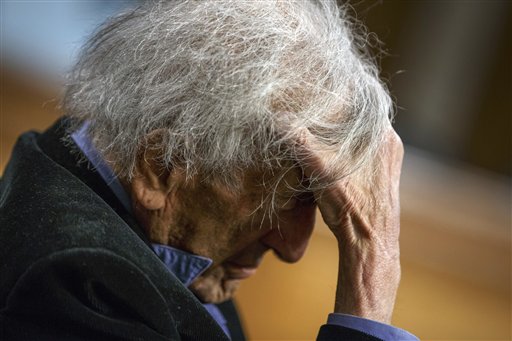 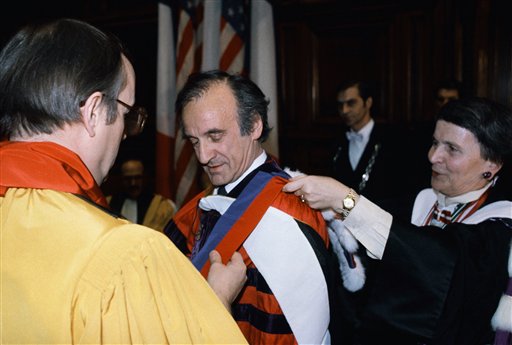 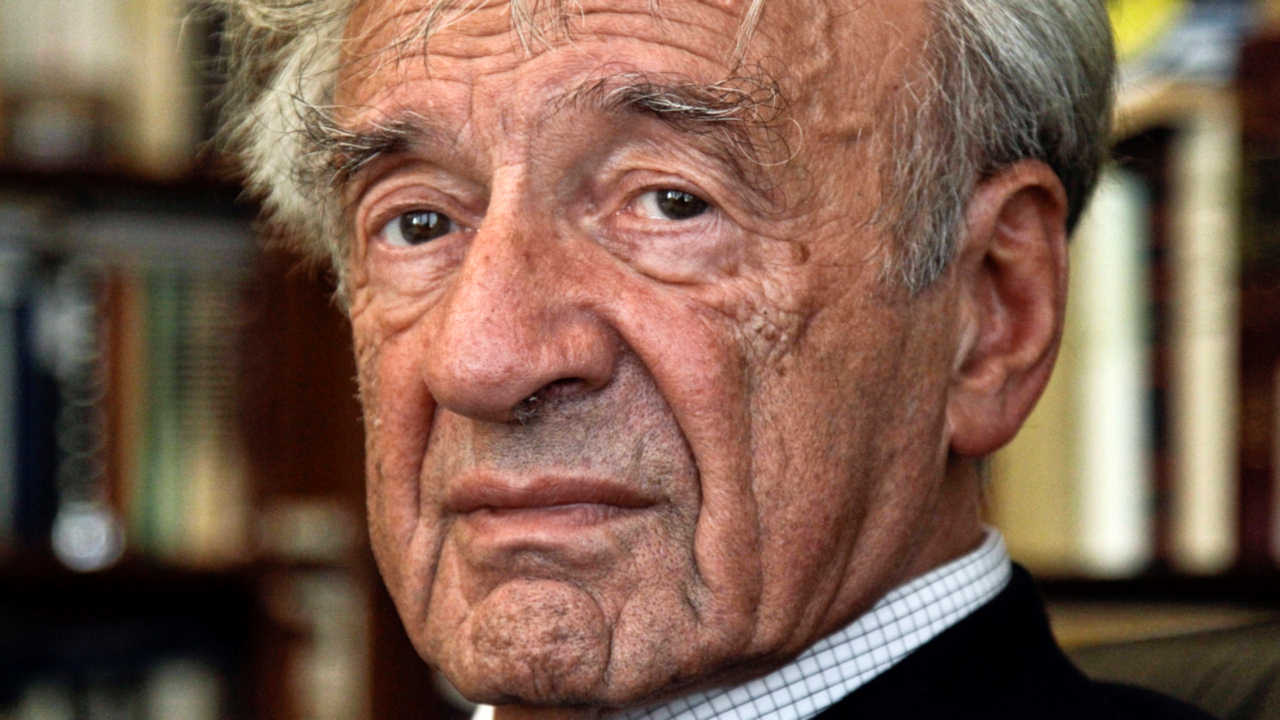 1 of 11
Holocaust survivor Elie Wiesel gestures while talking on April 20, 1985 during a White House in Washington.
AP

Wiesel began working on "Night" just a decade after the end of World War II, when memories were too raw for many survivors to even try telling their stories. Frank's diary had been an accidental success, a book discovered after her death, and its entries end before Frank and her family was captured and deported. Wiesel's book was among the first popular accounts written by a witness to the very worst, and it documented what Frank could hardly have imagined.

"Night" was so bleak that publishers doubted it would appeal to readers. In a 2002 interview with the Chicago Tribune, Wiesel recalled that the book attracted little notice at first. "The English translation came out in 1960, and the first printing was 3,000 copies. And it took three years to sell them. Now, I get 100 letters a month from children about the book. And there are many, many million copies in print."

In one especially haunting passage, Wiesel sums up his feelings upon arrival in Auschwitz:

"Night" was based directly on his experiences, but structured like a novel, leading to an ongoing debate over how to categorize it. Alfred Kazin was among the critics who expressed early doubts about the book's accuracy, doubts that Wiesel denounced as "a mortal sin in the historical sense." Wiesel's publisher called the book a memoir even as some reviewers called it fiction. An Amazon editorial review labeled the book "technically a novel," albeit so close to Wiesel's life that "it's generally - and not inaccurately - read as an autobiography."

In 2006, a new translation returned "Night" to the best-seller lists after it was selected for Oprah Winfrey's book club. But the choice also revived questions about how to categorize the book. Amazon.com and Barnes & Noble.com, both of which had listed "Night" as fiction, switched it to nonfiction. Wiesel, meanwhile, acknowledged in a new introduction that he had changed the narrator's age from "not quite 15" to Wiesel's real age at the time, 15.

"Unfortunately, 'Night' is an imperfect ambassador for the infallibility of the memoir," Franklin wrote, "owing to the fact that it has been treated very often as a novel."

Wiesel's prolific stream of speeches, essays and books, including two sequels to "Night" and more than 40 books overall of fiction and nonfiction, emerged from the helplessness of a teenager deported from Hungary, which had annexed his native Romanian town of Sighet, to Auschwitz. Tattooed with the number A-7713, he was freed in 1945 - but only after his mother, father and one sister had all died in Nazi camps. Two other sisters survived.

After the liberation of Buchenwald, in April 1945, Wiesel spent a few years in a French orphanage, then landed in Paris. He studied literature and philosophy at the Sorbonne, and then became a journalist, writing for the French newspaper L'Arche and Israel's Yediot Ahronot.

French author Francois Mauriac, winner of the 1952 Nobel in literature, encouraged Wiesel to break his vowed silence about the concentration camps and start sharing his experiences.

In 1956, Wiesel traveled on a journalistic assignment to New York to cover the United Nations. While there, he was struck by a car and confined to a wheelchair for a year. He became a lifetime New Yorker, continuing in journalism writing for the Yiddish-language newspaper, the Forward. His contact with the city's many Holocaust survivors shored up Wiesel's resolve to keep telling their stories.

Wiesel became a U.S. citizen in 1963. Six years later, he married Marion Rose, a fellow Holocaust survivor who translated some of his books into English. They had a son, Shlomo. Based in New York, Wiesel commuted to Boston University for almost three decades, teaching philosophy, literature and Judaic studies and giving a popular lecture series in the fall.

Wiesel also taught at Yale University and the City University of New York.

In 1978, he was chosen by President Carter to head the President's Commission on the Holocaust, and plan an American memorial museum to Holocaust victims. Wiesel wrote in a report to the president that the museum must include denying the Nazis a posthumous victory, honoring the victims' last wishes to tell their stories. He said that although all the victims of the Holocaust were not Jewish, all Jews were victims. Wiesel advocated that the museum emphasize the annihilation of the Jews, while still remembering the others; today the exhibits and archives reflects that.

Among his most memorable spoken words came in 1985, when he received a Congressional Gold Medal from President Ronald Reagan and asked the president not to make a planned trip to a cemetery in Germany that contained graves of Adolf Hitler's personal guards.

"We have met four or five times, and each time I came away enriched, for I know of your commitment to humanity," Wiesel said, as Reagan looked on. "May I, Mr. President, if it's possible at all, implore you to do something else, to find a way, to find another way, another site. That place, Mr. President, is not your place. Your place is with the victims."

Reagan visited the cemetery, in Bitburg, despite international protests.

Wiesel also spoke at the dedication of the U.S. Holocaust Memorial Museum in Washington in 1993. His words are now carved in stone at its entrance: "For the dead and the living, we must bear witness."

Wiesel defended Soviet Jews, Nicaragua's Miskito Indians, Cambodian refugees, the Kurds, victims of African famine and victims of ethnic cleansing in Bosnia. Wiesel was a longtime supporter of Israel although he was criticized at times for his closeness to Prime Minister Benjamin Netanhayu. When Netanhayu gave a highly controversial address to Congress in 2015, denouncing President Obama's efforts to reach a nuclear treaty with Iran, Wiesel was among the guests of honor.

"What were you doing there, Elie Wiesel?" Haaretz columnist Roger Alpher wrote at the time. "Netanyahu is my prime minister. You are not an Israeli citizen. You do not live here. The Iranian threat to destroy Israel does not apply to you. You are a Jew who lives in America. This is not your problem."

The Elie Wiesel Foundation for Humanity, which he established in 1988, explored the problems of hatred and ethnic conflicts around the world. But like a number of other well-known charities in the Jewish community, the foundation fell victim to Bernard Madoff, the financier who was arrested in late 2008 and accused of running a $50 billion Ponzi scheme.

Wiesel said he ended up losing $15.2 million in foundation funds, plus his and his wife's own personal investments. At a panel discussion in February 2009, Wiesel admitted he bought into the Madoff mystique, "a myth that he created around him that everything was so special, so unique, that it had to be secret." He called Madoff "a crook, a thief, a scoundrel."

Despite Wiesel's mission to remind the world of past mistakes, the greatest disappointment of his life was that "nothing changed," he said in an interview.

But personally, he never gave up - as reflected in his novel "The Town Beyond the Wall."

Wiesel's Jewish protagonist, Michael, returns to his native town in now-communist Hungary to find out why his neighbors had given him up to the Nazis. Suspected as a Western spy, he lands in prison along with a young man whose insanity has left him catatonic.

The protagonist takes on the challenge of "awakening" the youth by any means, from talking to forcing his mouth open - a task as wrenching as Wiesel's humanitarian missions.

"The day when the boy suddenly began sketching arabesques in the air was one of the happiest of Michael's life. ... Now he talked more, as if wishing to store ideas and values in the boy for his moments of awakening. Michael compared himself to a farmer: months separated the planting from the harvest. For the moment, he was planting."