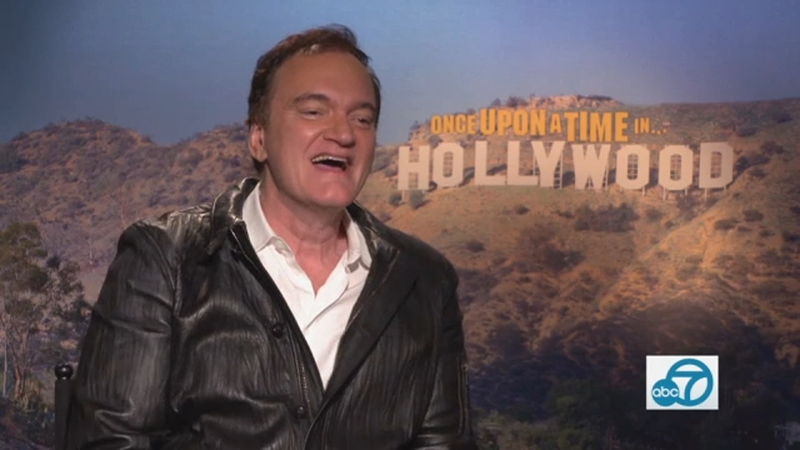 HOLLYWOOD, LOS ANGELES (KABC) -- We're going back in time to Hollywood 1969! Eye on L.A. host Tina Malave landed the exclusive with Quentin Tarantino, who sat down to give us a behind-the-scenes look at the L.A. hot spots featured in his mind-blowing new film, "Once Upon A Time In Hollywood."

Now we'll show you how to go out and have the Tarantino 1969 L.A. experience!

ONCE UPON A TIME...IN HOLLYWOOD
In the 9th film by writer, director, Quentin Tarantino, "Once Upon a Time In Hollywood" takes a look at 1960s Hollywood, from the standpoint of those working in the biz, and the outsiders who changed the culture forever. The story follows the lives of '60s TV star Rick Dalton, played by Leonardo DiCaprio, who feels like he's washed up, and his affable best friend and stunt double, Cliff Booth, played by Brad Pitt. They soon discover that Sharon Tate and Roman Polanski have moved in next door. Set amongst the stunning backdrop of L.A., you'll go on an emotional 1960s trip like only Quentin Tarantino can deliver!

To purchase movie tickets and explore the dramatic events, iconic locations, and the cultural shocks that inspired "Once Upon a Time In Hollywood" visit their new, interactive website: https://www.onceuponatimein1969.com/
EMBED More News Videos

When it was time to choreograph those groovy moves in "Once Upon a Time In Hollywood," Toni Basil was Quentin Tarantino's go-to!

THOSE 1960s MOVES with TONI BASIL
Most people know her as an '80s icon from her hit song, "Hey Mickey." Street dancers know her as a '70s icon, as the female founding member of the dance group, the Lockers, but it was her classical training mixed with club dancing that first got Toni Basil noticed as the top go-go girl in the '60s. And when it was time to choreograph those groovy moves in "Once Upon a Time In Hollywood," Toni Basil was Quentin Tarantino's go-to! Learn more about this dancing powerhouse at www.tonibasil.net and check out her cool, vintage videos at https://www.youtube.com/user/ToniBasilsHouse/videos

GROOVY '60s FASHION - THE WAY WE WORE
Planning to see the movie? Make it a whole experience and get dressed for the occasion! We stopped by one of our favorite vintage boutiques, The Way We Wore on La Brea where the 1960s are alive and swingin'! Once Upon a Time... in Hollywood costume designer, Arianne Phillips found many of the wardrobe pieces at this local treasure!
EMBED More News Videos

At The Way We Wore on La Brea, the 1960s are alive and swingin'! So if you're planning to see the movie, make it a whole experience and get dressed for the occasion!

THE PAN AM EXPERIENCE
Back in the 60s, Pan Am was thee stylish way to fly! The famous airline is now defunct, but we can still have that fabulous vintage experience on the very set that Quentin Tarantino shot scenes for the film! Just head to Pacoima for Air Hollywood's Pan Am Experience! The weekly retro-themed event is a blast for aviation enthusiasts and people looking for a new fine-dining experience. From the moment you arrive, you're sent back in time and fully immersed in the world of Pan Am, with all the details and elegance of its famed airline service.
http://panamexperience.com/

THE RESTAURANTS
Quentin Tarantino chose three of L.A.'s iconic restaurants to feature in important scenes in the film.

You could say that Musso & Frank on Hollywood Blvd. served as the heart of his Hollywood production. His brilliant production designers, led by Barbara Ling restored the surrounding storefronts and theaters back to the way they looked in 1969. You'll also see a major scene between DiCaprio, Pitt and Pacino played out at the bar and in the dining room. For a special photo opp, head outside to their parking lot in the back alley and take a selfie in front of the mural they painted of 1960s artist, Elaine Havelock's psychedelic posters of Charlie Chaplin, Mae West and W.C. Fields!

Quentin Tarantino chose three of L.A.'s iconic restaurants to feature in important scenes in the film - including the iconic Musso & Frank on Hollywood Boulevard.

EL COYOTE AND CASA VEGA
Bookending two important scenes in the movie are El Coyote and Casa Vega, two iconic Mexican restaurants, historically frequented by celebrities. As Tarantino describes it, "If you live in the Hollywood Hills you fall off the hill this way, you're in Casa Vega, you fall off the hill that way you're in El Coyote." In the film, Leonardo DiCaprio and Brad Pitt's characters go to Casa Vega on the Valley side. Margot Robbie, who plays Sharon Tate, and her friends go to El Coyote on the Hollywood side. El Coyote is also speculated to be the last place Tate and her friends had dinner.
Insider Tip* - When you visit Casa Vega, be sure to order the Tarantino Margarita! It's not only named after him, it's actually his recipe!

"Like" Eye on L.A. on Facebook and let us know where you want Eye on L.A. host, Tina Malave to visit next!
https://www.facebook.com/EyeOnLA
On twitter: @EyeOnLA @abc7tina
Instagram: @abc7eyeonla @abc7tina
Report a correction or typo
Related topics:
arts & entertainmentmoviesentertainmenthollywoodmoviemovie premiereeye on l.a.costumesrestaurantsquentin tarantino
Copyright © 2021 KABC-TV. All Rights Reserved.
EYE ON L.A.