Exide Technologies has been allowed to abandon its former battery-recycling plant in Vernon, leaving the state -- and taxpayers -- on the hook to pay for continued environmental cleanup.
City News Service 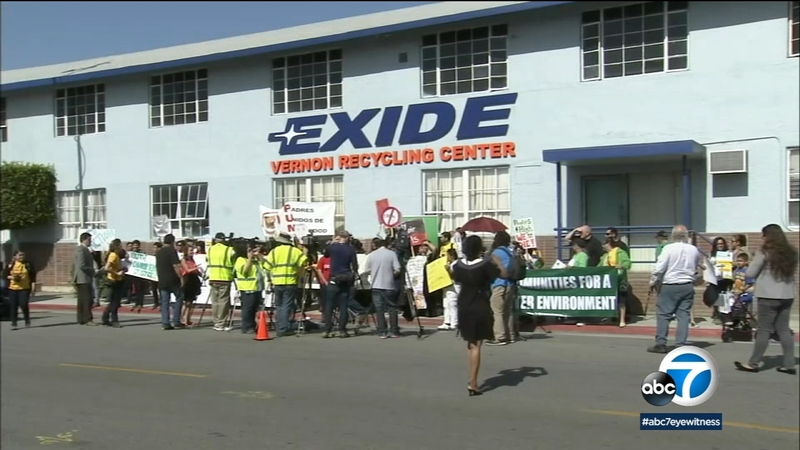 VERNON, Calif. (CNS) -- Over the objections of state and local officials, a judge on Friday approved a bankruptcy settlement allowing Exide Technologies to abandon its former battery-recycling plant in Vernon, leaving the state -- and taxpayers -- on the hook to pay for continued environmental cleanup of the site.

Bankruptcy Judge Christopher Sontchi in Delaware ruled that there was no imminent'' threat posed by Exide's abandonment of the plant, which resulted in extensive lead pollution in the air and soil in surrounding neighborhoods. State attorneys strongly objected to the settlement reached between Exide and the federal government and vowed to appeal.

The ruling allows Exide to formally abandon the site by the end of the month, after which the state will need to take over environmental remediation efforts. Sontchi in court had harsh words for the state and Department of Toxic Substances Control, suggesting both had failed to clean up the plant in a timely manner, which was allowed to continue operating for more than 30 years on a temporary permit. DTSC officials earlier this week issued a formal determination that the condition of the site presents an "imminent and substantial endangerment to the public health or welfare or to the environment.''

A new study reveals lead is being found in the baby teeth of children living near a former battery recycling plant in Vernon.

In 2015, the U.S. Department of Justice agreed not to prosecute Exide for violations of hazardous waste law in exchange for safely shutting down the Vernon facility and cleaning up related contamination, including lead found in the soil of surrounding homes. The Exide plant, which opened in 1922, operated despite continuing environmental violations.

In addition to lead-contaminated soil, concerns were raised about the emission of arsenic, cadmium and other toxic chemicals and the release of battery acid onto roads. When Exide closed the lead-acid battery recycling plant, it committed to pay $50 million for cleanup of the site and surrounding area.

Of that amount, $26 million was meant to be set aside for residential cleanup. In 2016, then-Gov. Jerry Brown approved $176.6 million to test soil at properties near the plant and conduct cleanup operations at as many as 2,500 properties near the site. At the time, it was the largest cleanup operation ever undertaken by the state. A portion of the site is now enshrouded in a large white tent put in place by an Exide cleanup contractor to contain lead contamination inside.

Los Angeles Mayor Eric Garcetti lamented the court ruling Friday, writing on his Twitter page, "Taxpayers shouldn't get stuck with the damage caused by polluters. Exide spewed poison into communities, and the federal government is letting them off the hook during a public health crisis. Americans deserve better.''

As of early January 2020, lead-contaminated soil at 1,537 Vernon-area homes have been cleaned since the Exide battery plant was shutdown nearly five years ago. Over 8,000 homes were flagged with lead and need to be cleaned.

In the settlement, which also covers sites in Florida, Georgia, Illinois, Indiana, Louisiana, Mississippi, South Carolina, Tennessee, Pennsylvania and Texas, the federal government agreed not to oppose abandonment of sites around the country, including Vernon. Debtors represent that they do not have the funds to complete the remediation and that the current funding for the bankruptcy cases is projected to be exhausted by the end of September 2020,'' according to the settlement document posted on the Department of Justice website.

In August, Exide sold its U.S.-based transportation, recycling and industrial power businesses, not including the contaminated sites in question, to Atlas Holdings LLC for $178.6 million. That money will be used to pay secured lenders and bankruptcy costs. The company has an agreement to sell its businesses outside the U.S. to a consortium of its creditors for $430 million, but that represents forgiveness of debt rather than proceeds to the company, according to the settlement.

A bond of $11.16 million was issued in connection with liabilities related to the Vernon site and, to the extent that money is still available, can be drawn against by an environmental trustee under the proposed settlement. A separate bond was issued for the remaining sites.