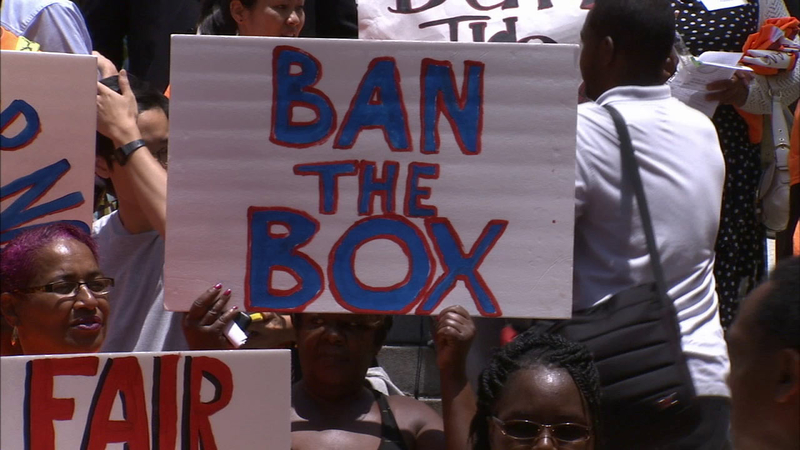 LOS ANGELES (KABC) -- A Los Angeles city councilman has introduced a proposed ordinance to remove the box on job applications that asks applicants if they've committed a felony.

Councilman Curren Price has introduced the "Fair Chance Initiative" to help even the playing field for convicted felons. If passed by the council, job applicants wouldn't have to check the felon box. Employers could still ask about their criminal history during a job interview.

"One out of every four adults in California has an arrest or conviction record, and one out of every three of those returns in Los Angeles," said Garcetti.

Garcetti says those are statistics he can't ignore and neither should Angelenos.

On the steps of Los Angeles City Hall, those in favor of the proposed city ordinance voiced their support, chanting, "Ban the box! Ban the box!"

People gathered at Los Angeles City Hall to show support for a bill that would remove the box on job applications that asks applicants if they've committed a felony.

Jaylen Allen, 12, says after his mother served 5 years in prison, she couldn't get hired.

"It was really sad because she was crying because she couldn't find a job, and we almost got evicted because she didn't have enough money to pay the rent," said Allen.

David Andrade says his criminal record prevented him from getting a job until Homeboy Industries gave him a chance. The organization hires felons and helps gang members turn their lives around.

"I've been with them for 10 months. I'm doing good. I'm also a computer lab assistant," said Andrade. "It was hard at first to get a job, but Homeboy Industries helped me out and I've been able to stay out of prison almost a year now."

Price hopes to get the council's full support and to vote before July.