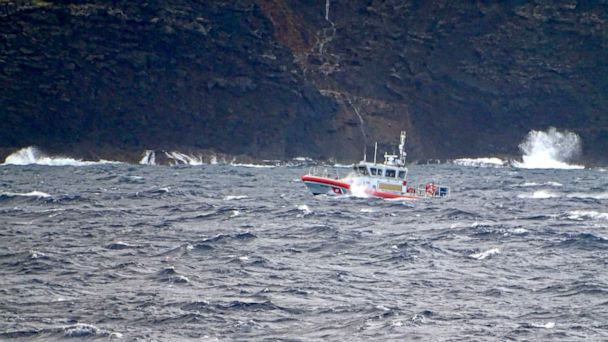 A flight instructor and a student pilot were rescued by a U.S. Coast Guard crew Saturday night after their plane experienced engine trouble, forcing them to ditch the aircraft in the ocean off the coast of Hawaii, officials said.

The two pilots were taken to a hospital with non-life-threatening injuries, according to Coast Guard officials. Their names were not immediately released.


Lt. j.g. Makenzy Karnehm, watchstander of the Coast Guard Joint Rescue Coordination Center, said a Coast Guard helicopter rescue crew from Air Station Barbers Point in Oahu managed to reach pilots about an hour after they ended up in the ocean about eight miles off the coast of Lanai, the sixth-largest Hawaiian island.

"As a watchstander, this is the type of outcome we want to see with every case," Karnehm said in a statement, "Both the Coast Guard and our partners train together for incidents like this and once the call came in we were able to quickly mobilize a robust response and rescue the pilots."

The Coast Guard and Maui Fire Department also dispatched boats to the area where the single-engine plane went down, officials said.

Coast Guard officials said they received a call at about 5:49 p.m. from the air-traffic control facility at the Daniel K. Inouye International Airport that an aircraft was experiencing engine trouble and was likely going to ditch in the ocean.

On-duty Coast Guard watchstanders issued an urgent notice to mariners in the area to be on the lookout for survivors, officials said.

A Mokulele Airlines plane that had just taken off from the Lanai Airport headed to Honolulu spotted the two men in the water and radioed in their location as they continued to circle, officials told ABC affiliate station KITV in Honolulu.


Passengers aboard the Mokulele Airlines flight said their pilot quickly asked them to help scan the ocean for the stranded flyers as they circled the area.

"The pilot said, 'There is an aircraft in distress. There is nobody else out there. We have to divert to find them,'" a passenger aboard the Mokulele Airlines flight told KITV. "We started a descending spiral over the ocean just looking for the aircraft. My wife and two passengers on the left side of the plane spotted the aircraft about to impact the water, then witnessed the aircraft impact the water."

The airline passenger, who asked to remain anonymous, said the pilot asked him and his fellow passengers to look for two people in yellow life jackets because the pilot kept losing sight of them.

"We kept losing the plane. It submerged. It was just a white tail in a blue ocean with white caps and two small people with life jackets," the passenger said.

Another crew from Kamaka Air also spotted the pilots in the water and continued to circle until Coast Guard crews arrived, the president of the airline told KITV.

George Hanzawa of George's Aviation Services in Honolulu told KITV that the plane that crashed was a DA40 Diamond Star that was owned by his company. He said the flight instructor also worked for his company and took a student on a training run Saturday afternoon. He said they were expected to return by sunset.
Report a correction or typo
Related topics:
abc newsnational
Copyright © 2021 ABC News Internet Ventures.
More Videos
From CNN Newsource affiliates
TOP STORIES