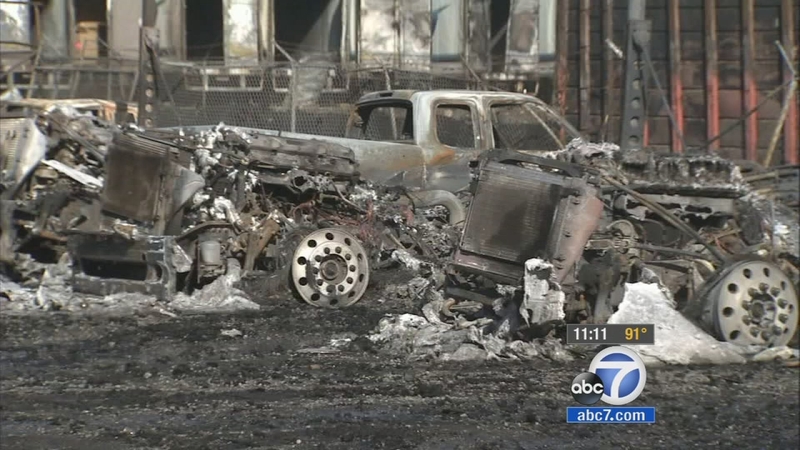 FONTANA, Calif. (KABC) -- A massive fire that broke out Sunday night at a pallet yard in Fontana has caused about $1 million in damage, officials said. Ten vehicles were destroyed and 31 semi-trucks were damaged.

San Bernardino County firefighters responded to the third-alarm fire on the 13800 block of Slover Avenue around 10:30 p.m. It took them nearly two hours to put out the blaze. Two firefighters sustained minor injuries, authorities said.

San Bernardino County firefighters responded to a fire at a pallet yard in the 13800 block of Slover Avenue in Fontana Sunday, Sept. 14, 2014.

The blaze was challenging for crews because of the high pallet stacks, according to fire officials. Crews were able to knock most of the heat out of the fire but they remained on scene Monday morning to watch out for hot spots.

"There are the stacks of pallets that still remain that have hidden pockets of heat inside of them. They are 25-30 feet high in a lot of places, so it's not really safe to climb in around them," said Battalion Chief Ronald Walls with the San Bernardino County Fire Department. "We brought in our dozer and we're actually having to drag those pallet stacks out."