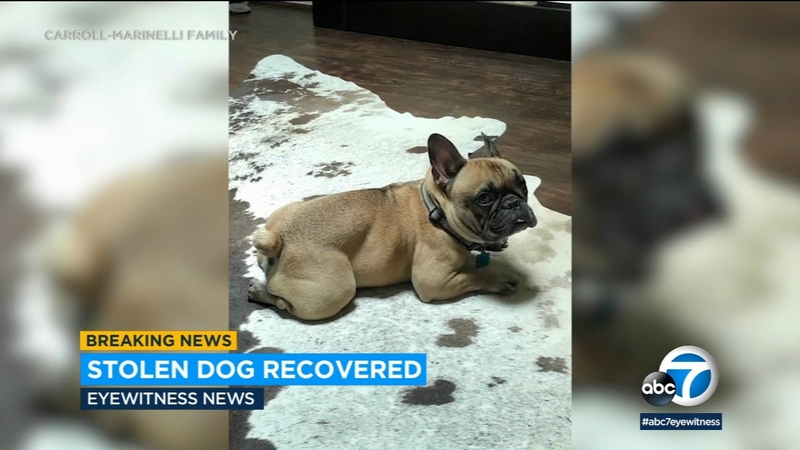 WEST HOLLYWOOD, LOS ANGELES (KABC) -- A French bulldog that was stolen in a violent attack on a man in West Hollywood has been found and safely returned to his owner, Eyewitness News has learned.

The dog, Luca, was stolen from Robert Marinelli as they were out for a walk early Tuesday morning. Marinelli was attacked and then dragged some 200 feet as his clothing was caught in the getaway car.

"I'm just completely distraught," Marinelli said at the time. "Someone has just ripped my heart out."

Thursday night, Eyewitness News learned that Luca has been returned to Marinelli and is safe at home. Details on how he was found were not immediately available. There were no immediate indications of a suspect in custody.

The Los Angeles Police Department is investigating the case, as Marineilli was dragged into the city of Los Angeles in the attack.

A man's French bulldog was stolen when he was brutally attacked during a vicious robbery in West Hollywood on Tuesday.

Marinelli was walking Luca around 7:30 a.m. near Sunset Boulevard and Doheny Drive on Tuesday.

He spotted a black sedan waiting on the street. As a man jumped out and moved toward him, Marinelli tried to pick up Luca and run. But the suspect knocked him to the ground and took Luca.

Marinelli's clothing got caught in the car.

"He pushed me down and slammed the door," he said. "And slamming the door must've caught part of me or my coat in it. They sped away and dragged me with them almost 200 feet down a gravel road."

The 8-year-old Luca has medical issues and diet restrictions and is missing a toe because of cancer.

Marinelli had offered a $10,000 reward but it was not immediately known if the reward would now be claimed with Luca's return.

Earlier this year, several French bulldogs belonging to Lady Gaga were stolen when her dogwalker was shot. Five people were later arrested.

Last week, three men held a woman at gunpoint in Hollywood and took off with her dog, according to police.

That incident happened on Wednesday around 7 p.m. on Detroit Street between Fountain and De Longpre avenues. Police say three men got out of a sedan and held the 58-year-old mother at gunpoint.

A devastated family is pleading for their beloved French bulldog be returned to them after they say three men held their loved one at gunpoint in Hollywood and took off with the dog.

The woman let go of the leash and the dog ran across the street before it was captured by one of the suspects.

Anyone with information on these incidents is urged to contact authorities.