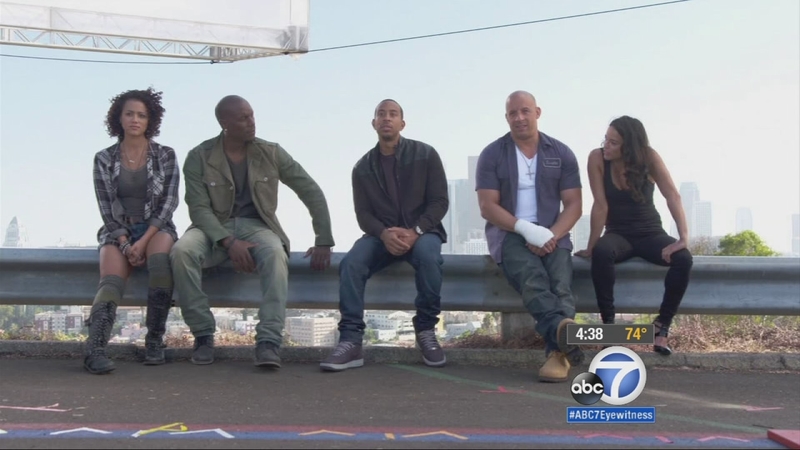 LOS ANGELES (KABC) -- The seventh film in the "Fast and Furious'" franchise was about 85 percent completed when actor Paul Walker died in a car accident in November 2013. His co-stars wanted to honor their friend by completing the film in his memory.

Tyrese Gibson proudly displayed his love for his friend by choosing to wear a shirt that bore a likeness of Walker on the front while publicizing "Furious 7."

"I've been wearing this sweater for two days in a row as a tribute to my brother. Because at no point do I want it to be about me," Gibson said.

Gibson, Vin Diesel, Chris "Ludacris" Bridges and Dwayne Johnson were all thrown for a loop with their friend's untimely death. But after taking a breath, they all came to the same conclusion: finishing the movie would allow them to honor Walker's legacy.

"The concept that someone's legacy was riding on our shoulders. The task of honoring and the task of using art as an homage was what drove us. It was what gave us the strength and the courage to continue," Diesel said.

Gibson added that a big thank you goes out to the faithful "Fast and Furious" fans, who encouraged them to move forward with the movie.

"We appreciate all the prayers and energy around the world that was sent for our brother. We felt it. We needed it. And it's the Walker family who are my, and our, true heroes," Gibson said.

"I think that there's no better way to end his legacy in this movie in terms of how creative we were and how we made it happen and honoring him with grace and class and integrity, I thought it was great," Ludacris said. "People are gonna be in tears at the end of this movie whether you like it or not."

"You've got to bring the tissue, because you get hyped up, you laugh in this, you get excited, the adrenaline is pumping, but then you're gonna cry," Johnson said. "We all cried in it. It's so triggering when you see Paul on screen. And ultimately we have a very nice tribute at the end, which I think is beautiful."